As the trailer of The Willoughbys ends, it pivots the emotions to the usual feel-good genre that we associate kids animated movies with. Just when you thought, you will be seeing something different. The Willoughbys hits Netflix on April 22. 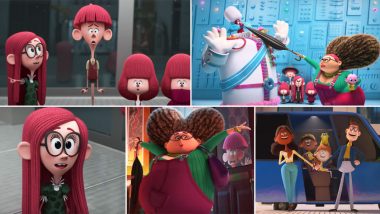 The first trailer of Netflix's upcoming animated comedy, The Willoughbys, has dropped on the internet. And it is all very weird. For context, the kids plan to murder their parents in the first half of the trailer. This is not going to be your usual kids' comedy, it is made evident very early on. The Willoughbys is based on a book by Lois Lowry. Kumail Nanjiani and Issa Rae Starrer The Lovebirds Heads For a Netflix Release Amid COVID-19 Lockdown.

The first trailer of the movie has a very A Series Of Unfortunate Events vibe to it. The children try and stay together as the world comes down to tear them apart. They should not have sent their parents on that potentially fatal adventurous trip. The kids reluctantly accept help from a nanny, voiced by Maya Rudolph. Speaking of the voice cast, get ready to hear Will Forte, Alessia Cara, Jane Krakowski, Martin Short, Ricky Gervais, and Terry Crews in the film as well. Netflix Postpones Inaugural LA Comedy Fest Featuring David Letterman, Kevin Hart Due to Coronavirus Outbreak.

As the trailer of The Willoughbys ends, it pivots the emotions to the usual feel-good genre that we associate kids animated movies with. Just when you thought, you will be seeing something different.

Netflix has not developed a lot of animated movies in the English language. The previous two attempts - Next Gen and Klaus - received good reviews. There are many more animated films lined up in the near future. How The Willoughbys is received is important to all of them.

The Willoughbys hits Netflix on April 22.

(The above story first appeared on LatestLY on Mar 23, 2020 08:09 PM IST. For more news and updates on politics, world, sports, entertainment and lifestyle, log on to our website latestly.com).