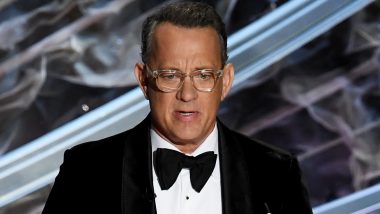 Hollywood star Tom Hanks has once again donated his plasma for research and development of a vaccine for Coronavirus treatment, and he is feeling "plasmatic". A month after his last donation, the actor took to Instagram to share moments after donating plasma. Hanks recovered from the virus earlier this year, reports people.com. He posted a shot of two bags of plasma on Instagram along with two other photographs showing the process, which includes drawing blood and another more detailed picture of the process. Tom Hanks Felicitates the Class of 2020 by Sharing His Semi-Official Diploma That’s Also Signed By Albert Einstein.

"Plasmatic on 3! 1,2,3 PLASMATIC!," Hanks, 63, wrote along with the pictures. In early March, Hanks and his wife, actress-singer Rita Wilson, had tested positive for Covid-19 while in Australia. They returned home to Los Angeles at the end of March after recovering. Wilson and Hanks were among the first celebrities to reveal their positive diagnosis last month, while they were in Australia. Hanks was filming an untitled Elvis Presley film in the country. The couple are now back in Los Angeles. Tom Hanks’ Movie Greyhound to Skip Theatrical Release and Premiere on Apple TV+?

In an interview on The National Defense Radio Show, the 63-year-old actor detailed his and his wife's struggle with respiratory illness. "Rita went through a tougher time than I did," he said of their recovery in Australia, adding: "She had a much higher fever and she had some other symptoms. She lost her sense of taste and smell. She got absolutely no joy from food for a better part of three weeks."

He continued: "She was so nauseous, she had to crawl on the floor from the bed to the facilities. It lasted a while." Hanks "had some body aches and was very fatigued", and shared how he struggled to find the energy to do simple exercises. He and Wilson were placed in "lockdown for three days" in a local hospital.

(The above story first appeared on LatestLY on May 28, 2020 03:39 PM IST. For more news and updates on politics, world, sports, entertainment and lifestyle, log on to our website latestly.com).