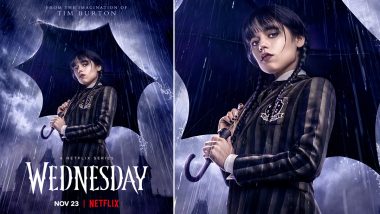 Netflix's Addams Family series, titled Wednesday is finally out and from the makers of Smallville, the show stars Jenna Ortega in the lead role. Tim Burton who is known for his work on famed fantasy-horror hits like Beetlejuice and Corpse Bride has directed this Netflix series and it also stars Catherine Zeta-Jones, Luis Guzmán and Fred Armisen in major roles. However, unfortunately, within a few hours of its release on OTT, Wednesday Addams is leaked online. The series is now available for streaming on torrent sites. There's an HD print available of the show to watch online. 1899 Full Series in HD Leaked on Torrent Sites & Telegram Channels for Free Download and Watch Online; Emily Beecham’s Netflix Series Is the Latest Victim of Piracy?

Wednesday Addams full series in HD has been leaked on several torrent sites like Filmywap, Onlinemoviewatches, 123series, 123seriesrulz, Filmyzilla, and other pirated versions of the series in HD (300MB free download in 1080p, 720p, HD online) are available for the audience to watch. The Crown Season 5 Full Series Leaked on Tamilrockers & Telegram Channels for Free Download and Watch Online; Elizabeth Debicki’s Netflix Series Is the Latest Victim of Piracy?

This is not the first time, an international Netflix series has been leaked online for free watch. We recommend users say no to piracy as the downloads might harm devices with malware and viruses. Wednesday Addams is

(The above story first appeared on LatestLY on Nov 23, 2022 07:04 PM IST. For more news and updates on politics, world, sports, entertainment and lifestyle, log on to our website latestly.com).