Will Ferrell Birthday: 5 Amazing Saturday Night Live Sketches of the American Actor That Will Leave You In Splits (Watch Videos)

Ferrell without a doubt has left a legacy of amazing works behind him and there's probably no one as good as him when it comes to pulling off comic roles. 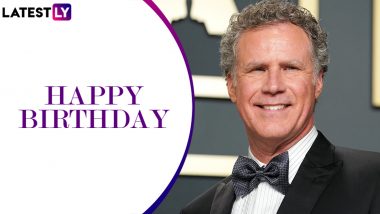 Will Ferrell is known to be one of Hollywood's funniest actors. The actor first showed his amazing talents in comedy with NBC's Saturday Night Live. The actor further moved from TV to Films as he showed off his great acting talents beyond comedy too. Ferrell has starred in major films such as Elf, Old School (both 2003), Blades of Glory (2007), Daddy's Home (2015), and the animated films Megamind (2010) and The Lego Movie among others. Ferrell without a doubt has left a legacy of amazing works behind him and there's probably no one as good as him when it comes to pulling off comic roles. Eurovision Song Contest Trailer: Will Ferrell and Rachel McAdams Turn Icelandic Music Duo With an Ambitious Dream for This Comic Entertainer.

Ferrell in his amazing career has received an Emmy Award nomination for his work on Saturday Night Live, and three Golden Globe Award nominations. He was also named the best comedian of 2015 in the British GQ Men of the Year awards. Will celebrates his birthday on July 16 and as he turns 53, we look at some of his best sketches from SNL that are always a hoot to watch. Ferrell is known for his physical comedy chops and he went over and above everything we have seen before when it came to SNL. Here's looking at his funniest SNL bits.

Ferrell's SNL sketch of former US President George W Bush 2018 return to the “Oval Office” was a rather hilarious one. In this video, Ferrell as George Bush talks about suddenly seeming like a better President thanks to Donald Trump's antics. You won't be able to stop yourself from laughing once he says, "I am suddenly popular AF".

Who can forget this epic episode which not only featured Will Ferrell's genius of pulling off physical comedy but also had Christopher Walken doing some straight face comedy. In this episode, music producer Bruce Dickinson (Christopher Walken) insists Gene Frenkle (Will Ferrell) play more cowbell. The sketch also had hris Kattan, Chris Parnell, Horatio Sanz and Jimmy Fallon.

When Ferrell Left Us Laughing With His Cheerleading Antics:

In this SNL sketch, Spartan Cheerleaders, Craig (Will Ferrell) and Arianna (Cheri Oteri) perform at their school's chess tournament. The chess team is certainly not ready for this pumped cheerleading. This is one unforgettable Ferrell moment on SNL.

The What is Love Guys!

Ferrell, Chris Kattan, and Jim Carrey are a deadly combo and while this video doesn't have much of dialogues. The three representing clueless club-goers who are constantly bobbing their heads to "What is Love" song is simply hilarious.

When Ferrell Turned Into Harry Caray:

Parodying broadcaster Harry Caray is one of the best SNL sketches featuring Ferrell. Ferrell asking, "Linda Ham, does your name ever make you hungry?” and such other questions in this video will leave you in splits. Will Ferrell to Star in the Remake of Netflix’s Documentary ‘The Legend of Cocaine Island’.

While Ferrell has made us laugh with his hilarious acts in movies too, these SNL sketches are simply unbeatable and we can't imagine any other actor pulling them off the way he did.

(The above story first appeared on LatestLY on Jul 16, 2020 10:10 AM IST. For more news and updates on politics, world, sports, entertainment and lifestyle, log on to our website latestly.com).