With the recent leak of Spider-Man: No Way Home’s trailer, we are taking a look at five other comic book films that had their trailer leaked online before its release. Read on. 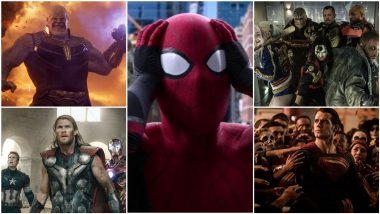 In an unexpected shocker for Marvel fans,the entire trailer for Spider-Man: No Way Home ended up leaking on TikTok. Though it had unfinished VFX, the trailer seemed pretty legit and gave us a good idea of what the film will be. The trailer was rumoured to premiere on Cinemacon this week, but to a lot of fans' surprise it ended up leaking online before it could have an official release. From Spider-Man No Way From Home Trailer Leak to Black Widow Legal Suit, 5 Controversies That Embarrassed MCU In 2021.

Spider-Man: No Way Home's trailer leak is nothing new when it comes to comicbook films. In this feature, we take a look at five other comic book films that had their trailers leaked online before its official release.

Avengers: Age of Ultron was all set to debut its trailer alongside a new episode of Agents of SHIELD, but unfortunately for Marvel, things didn’t go according to their way. A low-quality version of the trailer was leaked online and it gave the fans a first look at the film which was then followed by a hilarious tweet from Marvel.

ComicCon is often used to show audiences their first look at new and upcoming movies, and so was the case for Suicide Squad. The first official trailer was shown to a closed-off audience in an auditorium, but some fans took out their phones and recorded the entirety of it, and posted it on the internet. This eventually forced Warner Brothers to release the trailer online. Spider-Man - No Way Home Trailer Leak: All You Need To Know About What Got Out of Tom Holland's Upcoming Marvel Movie (SPOILER ALERT).

Director Zack Snyder was hosting an event that had some theatre chains showing off an exclusive look at Batman v Superman: Dawn of Justice. But just before the event could start, the entire teaser was leaked online in poor quality and featured Portuguese subtitles. This would then force Warner Brothers to release the trailer online while the event would have the teaser ending with an additional scene.

Avengers: Infinity War had its first trailer shown to a closed-off audience at D23. The event had audience members using no mobile devices during the entirety of its duration, but a sneaky fan still recorded the trailer and posted it online. Just months later Infinity War would have its first trailer drop online which was substantially different than the one shown off at D23.

Last year at DC Fandome, fans were going to tune in to see the first official look at Matt Reeves' The Batman. But unfortunately, the trailer leaked online before it was revealed officially. This forced Warner Brothers to release a few stills of The Batman showcasing our first look at Robert Pattinson and the rest is history as it's one of the most viewed trailers of all time.

(The above story first appeared on LatestLY on Aug 23, 2021 08:46 PM IST. For more news and updates on politics, world, sports, entertainment and lifestyle, log on to our website latestly.com).