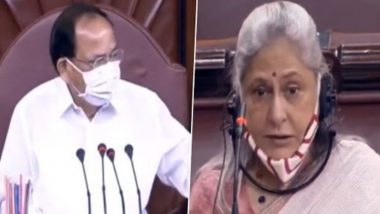 Mumbai, September 15: Jaya Bachchan, Samajwadi Party MP and veteran actor before speaking in the Parliament today removed her mask. It was then that Venkaiah Naidu, who was at the Chair reminded her to wear it, to which she said she won't be audible. She further said, "I'll clean the microphone, sir."

To translate his statement in English, he said to the member who opposed, "Jaya Bachchan has such a pleasing personality, you are getting to see her, what is your problem, she said that she will wear it after speaking."Jaya Bachchan Raises Issue Of 'Conspiracy to Defame Bollywood' In Monsoon Session Of Parliament, Says 'People Who Made Their Name in This Industry Now Call It Gutter'.

Bachchan was speaking about online harassment of actors and celebrities. She urged that the government should stand by the entertainment industry. People who earned fame through the industry are speaking ill of it, I am embarrassed and ashamed, she added.  Bachchan hit back at actor-politician Ravi Kishan who said in parliament on Monday that drug addiction is in the film industry too, saying that the industry is being "flogged by social media and the government's non-support".

(The above story first appeared on LatestLY on Sep 15, 2020 01:06 PM IST. For more news and updates on politics, world, sports, entertainment and lifestyle, log on to our website latestly.com).