Jaya Bachchan Raises Issue Of 'Conspiracy to Defame Bollywood' In Monsoon Session Of Parliament, Says 'People Who Made Their Name in This Industry Now Call It Gutter' 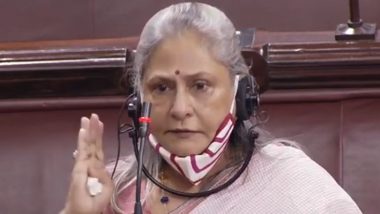 Veteran actor and MP Jaya Bachchan spoke about the raging controversy about the film industry in the wake of Sushant Singh Rajput's death and made a comment on how the industry is being defamed in a strongly-worded speech. On the second day of Monsoon Session in Parliament, MP Jaya Bachchan asked the government to take strict actions against those who are plotting a “conspiracy to defame the film industry”. The actress-turned-politician spoke about celebrities being 'flogged' by social media. Monsoon Session 2020: Ravi Kishan Raises Bollywood-Drugs Nexus in Lok Sabha.

As reported by ANI, during the parliament session, Bachchan said, "People in the entertainment industry are being flogged by social media. People who made their names in the industry have called it a gutter. I completely disagree. I hope that govt tells such people not to use this kind of language." The yesteryear actress also spoke about the industry being defamed because of 'some people' as she said, "Just because there are some people, you can't tarnish the image of the entire industry." Bachchan also hinted at comments of BJP MP Ravi Kishan over drugs nexus in Bollywood and said, "One of our members in Lok Sabha, who is from the film industry, spoke against it. It is a shame." Is Kangana Ranaut Taunting Rhea Chakraborty By Mentioning the Benefits of Sugarcane Juice Over Drugs?

Just because there are some people, you can't tarnish the image of the entire industry. I am ashamed that yesterday one of our members in Lok Sabha, who is from the film industry, spoke against it. It is a shame: Samajwadi Party MP Jaya Bachchan in Rajya Sabha https://t.co/cSvxi5dioc

Jaya Bachchan during the session put forth firmly that the 'government must stand with the entertainment industry'. In her Zero hour notice, Bachchan also spoke about the industry people being among the highest taxpayers and also has supported the nation in testing times.

(The above story first appeared on LatestLY on Sep 15, 2020 10:07 AM IST. For more news and updates on politics, world, sports, entertainment and lifestyle, log on to our website latestly.com).