#10YearsofMagadheera: These BTS Pics of Ram Charan and SS Rajamouli Are Making Us Curious About Their Upcoming RRR – Here’s Why

Ram Charan who recently joined Instagram, has shared the third post - #10YearsofMagadheera. This post is extremely precious for him as it was this SS Rajamouli directorial that shot him to fame in the industry. 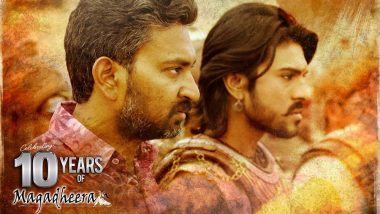 Ram Charan who recently joined Instagram, has shared the third post - #10YearsofMagadheera. This post is extremely precious for him as it was this SS Rajamouli directorial that shot him to fame in the industry. In fact, Magadheera has won him accolades which also includes Filmfare Award for Best Actor – Telugu. Ram Charan has shared a series of behind-the-scene (BTS) pictures from the sets of the 2009 film and it just making us curious for Rajamouli and Charan’s upcoming period drama, RRR. SS Rajamouli Directorial RRR's Pune Schedule Cancelled as Ram Charan Injures His Ankle.

Made on a budget of Rs 350 millon, released 1250 screens worldwide, Magadheera is one of the highest grossing Telugu films of all time. It earned Rs 1.5 billion worldwide and remained the highest-grossed Tollywood flick for five years. While sharing the post on Magadheera completing a decade, Ram Charan captioned it saying, “Can’t believe it’s been a decade already! Still seems so recent! A big thank you to the dream team of #Magadheera, Keeravaani garu, @kajalaggarwalofficial & @geethaarts for this memorable film. @ssrajamouli garu, learnt so much from you back then and continuing to do so even now. #10YearsofMagadheera.” RRR: Ajay Devgn to Play the Role of Ram Charan’s Father in SS Rajamouli’s Magnum Opus?

Here are BTS pictures of Magadheera:

In Magadheera Ram Charan played dual roles - brave soldier of a kingdom in Rajasthan in the 17th century and other was a bike racer. In RRR, Charan would be seen playing the role of revolutionary freedom fighter, Alluri Sitarama Raju. RRR is made on a budget of Rs 350 – 400 crore. We just cannot wait to watch the hit duo, Charan and Rajamouli’s work once again. Like Magadheera, how RRR changes Ram Charan’s career is what fans would love to see.

(The above story first appeared on LatestLY on Jul 31, 2019 03:07 PM IST. For more news and updates on politics, world, sports, entertainment and lifestyle, log on to our website latestly.com).