As Prabhas, Rana Daggubati and Anushka Shetty starrer Baahubali 2 complete 3 years today, netizens could not keep calm and trend #3YrsForMightyBaahubali2 all over Twitter. Check it out! 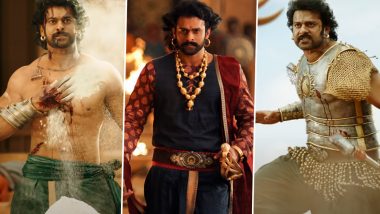 SS Rajamouli's Baahubali 2: The Conclusion is not just a film but is an emotion for fans. Be it the lead Baahubali (Prabhas), Bhallaladheva (Rana Daggubati), Sivagami (Ramya Krishnan) or Devasena (Anushka Shetty), all these characters are much more than celebrities for the flick's admirers. And well, as Bahubali 2 completes its three year anniversary on April 28, 2020, the massive fanbase of superstar Prabhas has already made their hero a trend on Twitter with #3YrsForMightyBaahubali2. As the magnum opus completes clocks 3 years today, fans of the actor could not keep calm are leaving no stone unturned to laud their favourite character from the hit. 'Baahubali 2: The Conclusion' Craze Reaches Japan, Video of Fans Cheering The Movie in Theatre Unanimously Goes Viral.

From sharing some BTS pics from Baahubali's shooting time, box office numbers to even rejoicing over Prabhas' character sketch, netizens have become all crazy. Must say none of the films in South has received this kind of love as Baahubali has and one of the reasons behind the same was Prabhas’ stardom. On that note, check out some tweets below: 2.0: 5 Reasons Why Prabhas' Baahubali 2 is a Much Better Film Than Rajinikanth-Akshay Kumar's Sci-Fi Extravaganza.

All Time Biggest Blockbuster of Indian cinema. Outcome of a Director vision and Actor Sheer Dedication risking 5 valuable years in the peak stage of career.#3YrsForMightyBaahubali2 pic.twitter.com/NqdmVu14nc

That's it , this is enough for the entire epic, grandeur, emotional all other bests of indian cinema to overshadow#3YrsForMightyBaahubali2 pic.twitter.com/J6T7VhobIz

Pride Of All Indians!

Baahubali is not just a film, it is the pride of all Indians.

Amarendra Baahubali is not just a character, he is the epitome of our culture, traditions & sensibilities

And one who made it possible, #Prabhas is not just an actor hi is a legend #3YrsForMightyBaahubali2 pic.twitter.com/gvvYnlqOjX

Made on an approx budget of Rs 250 crore, the epic saga revolved around the story of Prabhas (Baahubali), who after knowing that his father was killed by Bhallaladeva, charges up against the evil king and also frees his mother from the former's captivity. Just in case, you have not watched the film, do it ASAP. Stay tuned!

(The above story first appeared on LatestLY on Apr 28, 2020 12:01 AM IST. For more news and updates on politics, world, sports, entertainment and lifestyle, log on to our website latestly.com).