2.0: 5 Reasons Why Prabhas' Baahubali 2 is a Much Better Film Than Rajinikanth-Akshay Kumar's Sci-Fi Extravaganza 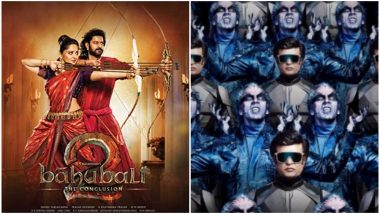 2.0: 5 Reasons Why Prabhas' Baahubali 2 is a Much Better Film Than Rajinikanth-Akshay Kumar's Sci-Fi Extravaganza

Ever since 2.0 has been announced, it couldn't escape the comparisons with the Baahubali series. And to think, perhaps we wouldn't even have had a 2.0 if Baahubali: The Beginning hadn't been received with such fanfare when it came out in 2015 (2.0 was announced in 2016). A lot happened after that. Baahubali 2 came out and became the highest grossing movie in India, while also the first Indian movie to gross more than Rs 1000 crore globally. Its director, SS Rajamouli, is considered a superstar, while the lead actor, Prabhas, is following up the mega-success of that film with another expensive flick, Saaho. Shades Of Saaho: This Gripping BTS Video Starring Prabhas and Shraddha Kapoor Will Give You An Adrenaline Rush!

Now 2.0 has come out but things are very different here. Unlike Baahubali 2, 2.0 has two established lead stars with a pan-India fan following in Rajinikanth and Akshay Kumar. It has a budget that is far more than Baahubali 2. While Baahubali sequel is made reportedly on a budget of Rs 250 crore, 2.0 has a budget that ranges from Rs 550 crore to Rs 600 crore. While 2.0 took off to a flying start at the box office, it still came behind Baahubali 2's opening figures. Even the Hindi dubbed version of Baahubali 2 fared much better than 2.0, that too without the presence of a Bollywood star like Akshay Kumar. 2.0 Box Office Collection: Forget Thugs of Hindostan, Baahubali 2, Akshay Kumar Fails To Beat The Opening Day Figures of His Own Movies!

A lot about this has to do with the content both the films have to offer. Sure, 2.0 has more special effects, some never seen in Indian cinema (the first Indian movie to be completely shot in 3D), but it is Baahubali 2 that makes for a better movie that Shankar's magnum opus. Here are five reasons why we feel so!

Both the Baahubali films came within a gap of two years and the sequel continued the saga like Peter Jackson's Lord of The Rings trilogy. The first film may not have been a monster hit, but it successfully managed to create a good platform for the sequel to perform in a much bigger way.

Enthiran aka Robot came out in 2010. While it was an entertaining movie thanks to its cheesy premise, Rajinikanth's OTT performance and decent special effects, Enthiran wasn't a huge hit in the North part of the country though it did well in South and even overseas. The sequel came 8 years later, riding solely on the star power of Rajinikanth and Akshay Kumar, as well as special effects. You can't really say that you are watching the film because it is the continuation of its predecessor, thereby losing the premise's connect with the movie-goers.

A More Impactful (and Crowd-Pleasing) Narrative

Speaking strictly about Baahubali 2, SS Rajamouli has crafted a very pleasing narrative with enough massy moments to win over the audience. Sure, the OTT finale was disappointing but before that, Baahubali 2 was an entertaining mix of action, romance, comedy and drama. Not terrific, but engaging for sure! People might have gone for Baahubali 2 for the canvas, but they left the theatres blown away by the whole package.

2.0 has its moments, only it doesn't know where to stop. Some of the scenes do leave an impact, like when the evil force uses mobiles to kills a couple of businessmen or that touching backstory of Akshay's character. However, in its objective to create a visual display of effects and playing up Rajinikanth's adoration, 2.0 sacrifices a consistent narrative and character-bonding moments, something Enthiran did well. Also for a Rajinikanth movie, it lacks memorable punch lines and relies too much on bad bird and mobiles puns. Pray, tell me what the big deal about this 'Dot' line that Vaseegaran keeps saying?

Baahubali 1 was trolled for how the film treated Tammanaah's character. The makers heard the complaints and wrote stronger character arcs for the female leads in the sequel. While Tamanaah still got the short end of the stick, Anushka Shetty and Ramya Krishnan's characters, Devasena and Sivagami respectively, fared much much better. Also, Baahubali 2 was praised for some of the dialogues about women empowerment.

Alas, the same cannot be said for 2.0. While the movie had sympathies for the birds, those sentiments were extended for its sole female lead, Amy Jackson. Acting more like a plot convenience tool and a sexualised cheer-girl for the male lead, Amy's robot character Nila is even termed as a domesticated laptop by Vaseegaran, despite doing a lot more useful than the heroes. As for Aishwarya's character from the first film, she is restricted to an off-screen voice-act. Well, at least, her character is not bumped off as is the trend with the sequels.

This might be cruel but it's true. I agree that the special effects of 2.0 are really, really good, especially the 3D aspects. The opening sequence is hauntingly beautiful even when it portrays a character's death. However, even with all the special effects worth more than Rs 500 crore, 2.0 is still not as visually appealing as Baahubali 2, whose painting-like contours lend itself to a visual grace that feels aesthetically better.

No matter how grand your movie is when it comes to presenting itself visually, any movie is deemed a good one when it leaves an indelible impression once you leave the theatres. In that case, it is Baahubali 2 that cares better compared to 2.0 and the reason is all the points mentioned above.

So, readers, do you agree that Baahubali 2 is a better movie than 2.0? Share your thoughts in the comments section below.

(The above story first appeared on LatestLY on Nov 30, 2018 04:52 PM IST. For more news and updates on politics, world, sports, entertainment and lifestyle, log on to our website latestly.com).