Adipurush: Sunny Singh to Portray the Role of Laxman in Prabhas and Saif Ali Khan’s Film?

After Kriti Sanon as Sita, the latest buzz is that the Pyaar Ka Punchnama 2 fame Sunny Singh has been approached to play the role of Laxman in Prabhas and Saif Ali Khan's film Adipurush. The flick is directed by Om Raut. 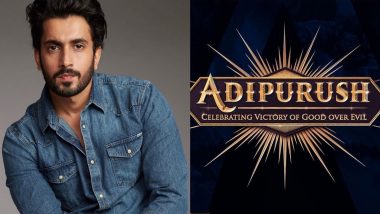 Om Raut directorial Adipurush has been creating quite a lot of buzz online. The movie is said to be based on the epic Indian tale of Ramayan wherein Prabhas will be seen essaying the role Lord Ram and Saif Ali Khan as Ravana aka Lankesh. Also, it was just a day ago, when a report in Mumbai Mirror stated that the movie has found its Sita in Kriti Sanon. And well, now as per the latest deets in TOI, it’s Sonu Ke Titu Ki Sweety fame Sunny Singh who has been approached by the makers to play Ram’s brother Laxman in the magnum opus. Adipurush: Kriti Sanon to Play the Role of Sita in Prabhas and Saif Ali Khan’s Magnum Opus?

“Sunny Singh has been approached to essay the character of Laxman, brother to Prabhas for ‘AdiPurush’ which also marks one of the most prominent roles in the film," a close source to the production said to the portal. If this news is true it will be interesting to see Sunny playing a mythological character onscreen. Adipurush: Prabhas Announces His Next with Tanhaji Director Om Raut and Fans Cannot Keep Calm (View Tweets).

“If all goes well, one can expect Sunny Singh in a completely different avatar and character on-screen. Sharing screen space with Prabhas is going to be a brilliant opportunity worth grabbing for Sunny," added the source. Adipurush: Prabhas and Saif Ali Khan Starrer to Hit the Screens on August 11, 2022 (View Post).

Sunny Singh grabbed the limelight after playing the role of Siddharth 'Chauka' Gandotra in Pyaar Ka Punchnama 2. His acting skills further got noticed in the 100 crore club film Sonu Ke Titu Ki Sweety. However, his last few films have been unable to impress the audience. Adipurush will go on floors in January 2021. Stay tuned!

(The above story first appeared on LatestLY on Nov 29, 2020 08:34 AM IST. For more news and updates on politics, world, sports, entertainment and lifestyle, log on to our website latestly.com).