Prabhas and Saif Ali Khan starrer Adipurush which is helmed by Om Raut finally gets its release date. The magnum opus will hit the big screens in August 2022. The flick will be shot in Hindi and Telugu and later will be dubbed in Tamil, Malayalam, and Kannada among other languages. 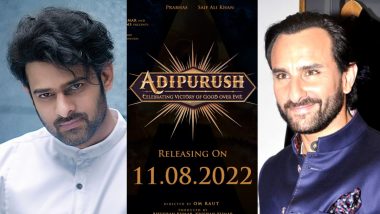 Here comes the moment all Prabhas fans have been waiting for, as the release date of the superstar’s upcoming film titled as Adipurush is finally unveiled by the makers. On Thursday morning, director of the magnum opus Om Raut as well as the actor took to their respective social media accoints and announced that the epic tale will hit the big screens on August 11, 2022. That means fans of the Telugu actor need to wait for quite a long time to witness the magic of good over evil. Adipurush also stars Saif Ali Khan in an antagonist role. Adipurush: Prabhas Announces His Next with Tanhaji Director Om Raut and Fans Cannot Keep Calm (View Tweets).

Reportedly, the flick will see Prabhas playing the role of Lord Rama whereas the makers are yet to finalise the female lead for the film. Amid this, many names have been floating around, from Kriti Sanon, Deepika padukone, Anushka Sharma, Keerthy Suresh to Kiara Advani. Also, going by the looks of the poster, the film seems to be based on Ramayan. Adipurush: Ajay Devgn Not A Part Of Prabhas Starrer?

Earlier in a statement, talking about the film Prabhas had said, “Every role and every character comes with its own challenges, but portraying a character like this comes with tremendous responsibility and pride. I am very excited to portray this character from our epic, especially the way Om has designed it. I am sure the youth of our country will shower all their love on our film.” Adipurush will be shot in Hindi and Telugu and later will be dubbed in Tamil, Malayalam, and Kannada among other languages. Stay tuned!

(The above story first appeared on LatestLY on Nov 19, 2020 08:33 AM IST. For more news and updates on politics, world, sports, entertainment and lifestyle, log on to our website latestly.com).