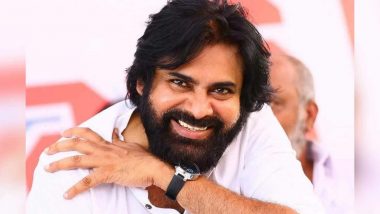 Pawan Kalyan would be celebrating his 49th birthday on September 2 this year. Fondly referred as Power Star, fans have already started with his birthday celebrations. The Tollywood star has won hearts with his performances over the years. Fans have been trending #AdvanceHBDPawanKalyan on Twitter, sharing various pictures of the actor. The excitement among them to celebrate his birthday can clearly be seen. There is two more months left for Pawan Kalyan’s birthday, but looks like fans can’t keep calm. Vakeel Saab: 35 Days Required To Complete The Shooting Schedule Of Pawan Kalyan Starrer?

Pawan Kalyan, born as Konidela Kalyan Babu, is the youngest brother of Megastar Chiranjeevi. He had made his acting debut in 1996 with the film Akkada Ammayi Ikkada Abbayi. In 2008 he entered into politics and in 2014 he founded the Jana Sena Party. Besides being a fabulous actor and being known for his political career, the Power Star holds black belt in karate and he is also specialised in various martial arts. PSPK27: Power Star Pawan Kalyan’s Period Drama to Feature Sivakarthikeyan in a Pivotal Role?

💚The man of humanity😍

💚The man of commitment

💚The man of simplicity

💚The man of dedication

💚The man of inspiration💯

💚The man of dignity

All Hearts For The Jana Sena Chief

Not a single day has passed without thinking about the party. Many moments to take pride in, few disappointments, but for me as long as Janasena exists, there is hope. Thank you @PawanKalyan #AdvanceHBDPawanKalyan ❤💪🏻

On the work front, Pawan Kalyan was last seen in the 2018 released film Agnyaathavaasi, directed by Trivikram Srinivas. After two years, the Power Star is making a comeback with Venu Sriram’s courtroom drama, Vakeel Saab. This upcoming flick is a remake of the Hindi movie Pink that featured Amitabh Bachchan in the lead role. The film was set for a theatrical release in May, but had to be pushed back owing to the coronavirus outbreak. The makers are yet to announce the new release date.

(The above story first appeared on LatestLY on Jul 14, 2020 08:36 AM IST. For more news and updates on politics, world, sports, entertainment and lifestyle, log on to our website latestly.com).