Akhil Akkineni Birthday: 5 Pictures of the Star That Are All About His Love for His Dogs (View Pics)

Apart from this, Akkineni is also a very family-man kind of person. He likes to spend his time with his family which includes two very cute dogs. His Instagram is full of adorable pictures of his dogs named Khalisi and Drogo. 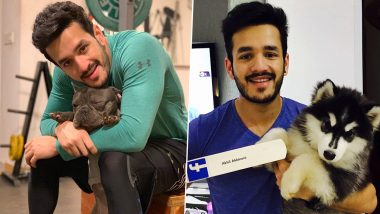 Akhil Akkineni has made a mark in the Telugu industry within just a few years of his career. He first appeared on screen when he was one and made his official debut in 2015. His debut film was Akhil: The Power Of Jua, which received much love from the audience. Being the son of one of the biggest stars in the South industry, Naragrjuna Akkineni, the actor proved his talent and is one of the most loved actors in the industry. Happy Birthday, Akhil Akkineni! A Little Bit of Casualness Here, Some Dapperness There, but Oodles of Boyish Charm Is What We Love the Most!

He has been a part of films like Middle Class Abbayi,  Mr. Majnu, Most Eligible Bachelor. His first film as an infant was his father's production, Shiva Nageswara Rao's comedy titled Sisindri, an Indian adaptation of Baby's Day Out. Before making his official debut in 2015, Akkineni also appeared in a cameo role in Vikram Kumar's hit family drama Manam. The film featured three generations of actors from the Akkineni family and his brief cameo was an instant hit with the audience. #Akhil5: Akhil Akkineni Teams Up With Sye Raa Narasimha Reddy Director Surender Reddy For His Next!

Apart from this, Akkineni is also a very family-man kind of person. He likes to spend his time with his family which includes two very cute dogs. His Instagram is full of adorable pictures of his dogs named Khalisi and Drogo and since today the actor is celebrating his 27th birthday, we are taking a look at 5 adorable picture of his four-legged friends. Take a look:

A Good Morning From The Akkineni's!

In this super adorable picture, we can see Akhil hug Drogo tightly in the first picture. If you scroll to the other pictures, you will see him pose with Khalisi as they get ready to kickstart a busy day.

Drogo often is seen in the gym with Akhil. This cute snap was shared by the actor before one of his workout sessions where he used Drogo's cuteness to lure people into fitness.

Akhil is a proud dog-dad and when his little one, Khalisi stepped out for her first big outing, the actor made sure he captures that precious moment in a picture. Aren't the two really adorable?

This cute selfie of Akkineni and Khalisi is the cutest thing you will see today. The actor shared this random snap to express his love for his queen, Khalisi.

Akkineni shared another picture with Khalisi as they were set to watch India vs West Indies match back in 2016. Dressed in blue to support out team, Akkineni said he wished he could make Khalisi wear the colour too. How cute!

Akhil Akkineni's dogs just gave us an overdose of cuteness today and we think that is the best return gift he could give us. Here is hoping of seeing him more on the movie screen and seeing more and more of Khalisi and Drogo on his Insta feed.

(The above story first appeared on LatestLY on Apr 08, 2021 08:40 AM IST. For more news and updates on politics, world, sports, entertainment and lifestyle, log on to our website latestly.com).