Before Yash's KGF, Sanjay Dutt Was Being Considered for Prabhas' Baahubali and Here's Why He Couldn't Be a Part of It

Sanjay Dutt was being considered for a very crucial role in Prabhas - Rana Daggubati's period saga, Baahubali but destiny wasn't in his favour then. 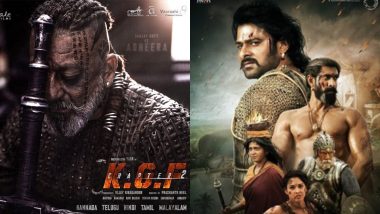 Sanjay Dutt was considered for this role in Baahubali (Photo Credits: Instagram)

Sanjay Dutt's first look as Adheera from Yash's KGF: Chapter 2 boggled our minds for reasons valid enough. It was unveiled on the occasion of the actors birthday and fans have been busy singing his praises since then. While the film is certainly not his debut in the regional film industry, it's his first in Kannada cinema. However, for the ones who don't know, the actor was earlier being considered for another regional blockbuster but destiny wasn't in his favour then. Yes, the film in the discussion here is SS Rajamouli's epic period saga, Baahubali. KGF Chapter 2: Twitterati Compares Sanjay Dutt’s Intense Look As Adheera To Ragnar Lothbrok From Vikings (View Tweets).

Sathyaraj who played Katappa in this multi-starrer wasn't the first choice of the makers for the role. They were, in fact, considering Sanjay Dutt and wanted to rope him for the same. Film writer, K V Vijayendra Prasad in his recent interaction with Rediff.com revealed their initial thought about having Dutt on board and why it didn't materialise. "For Kattappa, we had Sanjay Dutt in mind. But then it was dicey as he was still in jail. The next option was Sathyaraj," he said while elaborating on why the Bollywood star couldn't be a part of his narrative. Sanjay Dutt As Adheera in KGF Chapter 2: Did You Know This Is Not Khalnayak Star’s First South Film? Watch VIdeo.

We bet Sanjay's inclusion as Katappa would have been equally thrilling but now when we think about Baahubali and Katappa, Sathyaraj is the only name that comes to our mind. Sanjay will play the role of a brutal antagonist in KGF: Chapter 2 which also has Raveena Tandon in a very crucial role. Its first chapter was a huge hit at the box office and here's hoping its sequel is able to taste the same success.

Also, coming to Sanjay's previous regional outing, he had a cameo in the 1998 Telugu release, Chandralekha.

(The above story first appeared on LatestLY on Jul 29, 2020 06:27 PM IST. For more news and updates on politics, world, sports, entertainment and lifestyle, log on to our website latestly.com).