Bigg Boss Tamil 5 Grand Finale: Top 5 Finalists, Time, Where To Watch – Here’s All You Need To Know About The Reality TV Show Hosted By Kamal Haasan!

The audience of the controversial reality TV show, hosted by Kamal Haasan, are eagerly waiting to know who will lift the trophy of Bigg Boss Tamil 5. 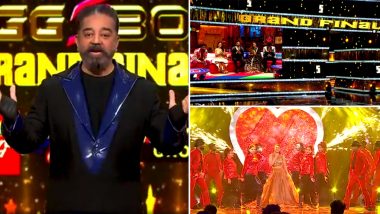 All eyes are on the winner of Bigg Boss Tamil 5! The audience of the controversial reality TV show, hosted by Kamal Haasan, are eagerly waiting to know the results that will be announced today evening. Bigg Boss Tamil 5 premiered on October 3 last year with 18 contestants originally entering the show and two wild card entrants later. The controversial reality show is coming to an end and the finalists are cherishing final moments in BB house. Ahead of the grand finale of the fifth season of Bigg Boss Tamil, here’s looking at the key details such as the top five finalists of the show, time and where one can watch it. Bigg Boss Tamil 5: Actor Sarath Kumar Offers Contestants A Prize Money Of Rs 3 Lakh To Quit Kamal Haasan Hosted Show (Watch Video)

Top 5 Finalists – The journey inside the house wasn’t easy. But after facing all the tasks and challenges, the five contestants who have made it to the finale of the popular show are Pavani Reddy, Raju Jeyamohan, Niroop Nandhakumar, Amir and Priyanka Deshpande.

Date & Time Of The Show – The grand finale of Bigg Boss Tamil 5 is happening today, January 16. The finale will be a gala event just like shown in the promo below. It will start from 6.30pm onwards.

Where To Watch – There’s just few hours left for the grand finale of the popular reality TV show. Bigg Boss Tamil 5 will be available to watch on Vijay Television as well as on Disney+ Hotstar.

Who do you think will lift the trophy of Bigg Boss Tamil 5? Share your views with us on the comments section below.

(The above story first appeared on LatestLY on Jan 16, 2022 02:21 PM IST. For more news and updates on politics, world, sports, entertainment and lifestyle, log on to our website latestly.com).