Chakra Trailer: Vishal Wages a War Against a Cyber Criminal In His Next Action Movie (Watch Video) 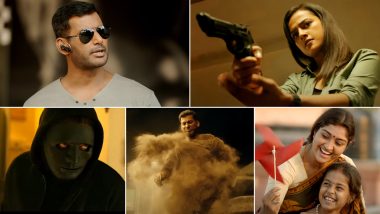 Vishal's next big release in MS Anandan's Chakra that sees him fight cybercrime. With an interesting premise loaded with tons of action sequences, this one's bound to be a treat for all the actor's fans. Though fans are expecting the makers to announce the film's release date, the fact remains that they are still contemplating to zero in a date. Meanwhile, they have released the film's first trailer that's bound to intrigue you further. Chakra Teaser: Vishal's Next Film About Cyber Hacking Intrigues With New Promo (Watch Video)

Vishal plays a military man who wages a war against a cyber-criminal. The movie has an intriguing plot of cybercrime and bank robberies which isn't really unique but trust Vishal to make it a worthwhile affair. While cyber robbery continues to dominate the storyline, the criminal here also has an ulterior motive. He robs a medal(Ashok Chakra) from a martyr's photo frame for reason that isn't explained. The movie also emphasizes on a very important issue of cybersecurity and shows you how an ordinary wireless network could be dangerous. Chakra First Look: Vishal’s Next Looks like An Action-Packed Flick, Regina Cassandra and Shraddha Srinath Are the Leading Actresses.

Chakra's trailer was simultaneously released in four languages. While Karthi released the trailer in Tamil, Arya did the honours for Telugu, Mohanlal for Malayalam and finally Yash for Kannada. The film also stars Shraddha Srinath, Regina Cassandra, Manobalan, Robo Shankar and KR Vijay in key roles. Earlier there were rumours if the movie will head for an OTT release directly. However, if sources close to the producers are to believe, the film will release only in theatres. Which further means we'll have to wait for a while before the film is able to release on the big screen.

(The above story first appeared on LatestLY on Jun 27, 2020 05:21 PM IST. For more news and updates on politics, world, sports, entertainment and lifestyle, log on to our website latestly.com).