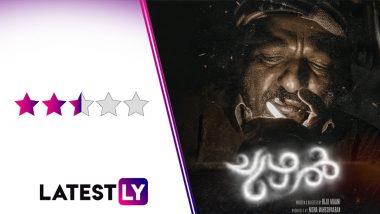 Chuzhal Movie Review: Chuzhal, directed by Biju Maani, is a very different supernatural film when seen in the context of Malayalam Cinema. Well, at least most of it, anyway. Save for Jaffer Idukki, the cast are mostly newcomers and the film definitely has a high-concept premise. Having earlier made its OTT premiere on Neestream, Chuzhal has now reached Amazon Prime Video. So here's what we feel about this thriller from Malayalam cinema. Anugraheethan Antony Movie Review: Sunny Wayne and Gauri Kishan’s Romantic Drama Is About Seeking Closure in Unexpected Ways.

Five friends (RJ Nilja, Abin Mary, Sanju Prabhakar, Gazal Ahamed and Sreenath Gopinath) are travelling in a car at night through hilly terrains, returning from a friend's wedding. Earlier that day, they were involved in a road rage incident after having narrowly avoided a brush with death.

As they find it difficult to drive through the night, they decide to stay at a nearby resort and continue in the morning. The villa they chose is a home-stay, whose only inhabitant is a caretaker called Eldo (Jaffer Idukki). Before they know it, spooky things begin to happen to each of the friends that is beyond their comprehension.

The kind of paranormal activities that take place in the desolate resort isn't the usual yakshi-stuff, but something that play with their minds and our intrigue. Are they imagining things? Is everything a dream one of the friends is having? Is it a ghostly event? Does everything spooky happening to them has a connection to that road rage incident? These questions do keep playing in your mind, and conveniently, all of them get answered in the end. The movie is also well-shot, courtesy Sajid Nazer. The actors are decent enough, with Jaffer Idukki and Nilja being the pick of the lot. Wolf Movie Review: Samyuktha Menon and Arjun Ashokan Can’t Save This Confused Thriller.

While the central premise is arresting, have to say that the director seems inspired by the 2013 Hollywood film Coherence, though narrated in a more understated and understandable manner. While the inspiration is ignorable for those who haven't watched the original and that Chuzhal keeps it simplistic, I was very much disappointed with the third act (that also seemed to loosely based on a twist from a Malayalam movie Aparichithan). The movie turns into a supernatural revenge story, which feels kind of a bummer, considering it enters into a usual Aahat territory.

Another disappointing feature about Chuzhal, is that despite having a contained runtime of merely 81 minutes, the movie still feels like a short film stretched over that period. Certain sequences like a car driving to hilly terrains in the opening sequence, and later, a flashback portion in the third, feels needlessly elongated.

As a supernatural thriller, Chuzhal does offer a different experience for Malayalam viewers, though it isn't exactly original and the climax is predictably droll. Chuzhal is streaming on Amazon Prime Video.

(The above story first appeared on LatestLY on Oct 20, 2021 08:14 PM IST. For more news and updates on politics, world, sports, entertainment and lifestyle, log on to our website latestly.com).