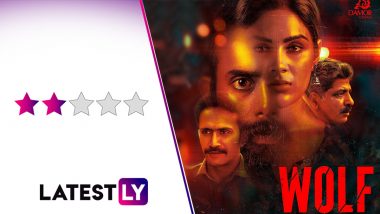 Wolf Movie Review: The famous fairytale of Little Red Riding Hood seems to be an inspiration for Wolf, a thriller, directed by Shaji Azeez (Shakespeare MA Malayalam). Here, the movie begins with the idea that Sanjay (Arjun Ashokan) is the 'Big Bad Wolf' trying to trouble the 'Little Red Riding Hood' of the story, Asha (Samyuktha Menon). There are also talks of murder and cannibalism in the film. The thing is, the Wolf is about to marry Red, and not the jungle, but it is the lockdown that keeps them on the strife. The Great Indian Kitchen Movie Review: Nimisha Sajayan, Suraj Venjaramoodu’s Social Drama, Now Streaming on Amazon Prime Video, Is Brilliant!

Sanjay takes a detour to pay a surprise visit to his fiancee Asha, while returning home from a temple visit. He reaches there at night, and gets a cold reception from Asha whose attitude clearly says he isn't welcome there. Sanjay, disregarding this, keeps insisting on staying with her, even though she keeps telling him that he shouldn't be there when her mother isn't at home.

His hot-headed nature and bloated ego keeps irritating Asha more and more. Things sour further when Modi announces lockdown due to COVID-19 (the movie takes place in March 2020) and the two cops (Shine Tom Chacko and Jaffer Idukki), whom Sanjay slighted earlier, prevents him to going to his home, much to Asha's chagrin. Now stuck under the same roof. Asha and Sanjay's relationship gets deteriorated even before it blooms, especially as Sanjay realises that there is something strange going on in the house.

Exposing male toxicity has been a fave trend among Malayalam filmmakers these days, a job so well done by Madhu C Narayanan's brilliant Kumbalangi Nights. Films like Ishq, Kappella, The Great India Kitchen and even the recent Irul to some extent tackled misogyny and sexist nature of the male protagonists to various levels of success.

Shaji Azeez, jumping onto this GenNext bandwagon, also gets on with this trend, but it doesn't work at all - even when all the ingredients are there. From the opening scene itself, it is established that Sanjay is a shallow, quick-tempered misogynist and rendered extremely unlikeable. The presence of the two policemen recalls the moral policing of Ishq, considering they are played by the same actors, though on a much, much milder level. Maybe Asha being the daughter of a Police Superintendent might have restricted their sexist nature to just snide jokes and smirks.

Keeping a misogynistic man and an uncomfortable woman in a house could lead to a series of awakenings for both, as they debate over each other's behaviours. Asha points out that she can't deal with his temper issues for lifetime, Sanjay refuses to take the hint that she wants nothing to do with him in her life. The discussion of toxic masculinity gets further interesting over Sanjay's discovery of a presence inside the house. Joji Movie Review: Fahadh Faasil Brings Another Shade of Grey to Dileesh Pothan’s Macbethian Tale of Greed.

Interesting doesn't really mean well-done, though. The problem comes more with Sanjay himself, not just with his behaviour but also how the character is written. Since the film keeps trying to bring his sexist nature in every next scene, Sanjay's pigheadedness feels very artificial, senseless, and yes, repetitive too. What's worse, we know that that that dislikeable nature of his could head for abrupt perceptual change. Remember how Kappella turned Sreenath Bhasi's character from a rude young man to an unlikely saviour? Wolf may have not gone to that extent, but the similarities can't be missed.

Even more issues come from how the female characters are depicted. Sanjay's insulting behaviour to his childhood friend Riva made me wonder why the girl would even bother to be pals with this a-hole. Sanjay tells Asha that he doesn't want to marry Riva, because she wears shorts. While that revelation further establishes Sanjay of being a prick, I assume it means that Riva is some kind of a bold girl with care-no-damn nature. There might be some moments in the past where Sanjay, knowing his ego, must have told Riva off for wearing shorts, but the only scene we see her in the film, she continues to wear that. If she can keep that rebellious streak, why even be pally with someone this close-minded that she keeps pestering him with calls? Krishnankutty Pani Thudangi Movie Review: Saniya Iyappan, Vishnu Unnikrishnan’s Gripping Mystery-Thriller Is Enhanced by Its Spooky Sound Design.

Wolf's biggest drawback is how it deals with Asha's character. It is cemented early on that she can't stand Sanjay's nature and doggedly draws the line he can't cross with her, which is cool. Yes, she keeps instigating him to see Riva as a better bride than herself, even though she hates his misogyny. I can pass that off as her way to get rid off him so that she can go ahead with her own life.

When the first big reveal comes out and Asha becomes a more determined character, I cheered every time she took Sanjay down with her rigid stances. I thought here was a woman who knew what she want and is going to get that. Alas, that was not meant to be thanks to very frustrating third act, that completes takes out her agency and renders her as this silly girl whose convictions turn her to be victim of her doing, thereby ruining any goodwill the first two acts created.

GR Indugopan's screenplay had a lot of promises. None of it gets delivered properly in the end. Like for example, the two cops had very less to do in the scheme of things. Irshad's character who enters the film midway started off in a great manner, before turning into a very contrived personality towards the end. The bohemian style of speaking that he adopts turns boringly verbose towards the end. There's also the sly hinting of COVID-19 entering the premise but even that goes nowhere, just like the cops in the film.

What saves Wolf to some extent are the performances, with Arjun and Samyuktha doing their best with what they can do with their characters. It is Irshad, however, who comes out with the most impressive performance of the lot, tuning us well with his mysterious character even when the writing undoes it towards the end.

- A Decent First Half

- The Disappointing Second Half

- Writing Around the Female Characters

Wolf starts off on a promising note before it turns out to be a tepid thriller that is confused about the point it wants to make. What starts off as a confrontation of male toxicity, the movie forgets its own lesson and ultimately, loses its identity in the process. Wolf is streaming on Zee5.

(The above story first appeared on LatestLY on Apr 18, 2021 08:26 PM IST. For more news and updates on politics, world, sports, entertainment and lifestyle, log on to our website latestly.com).