Dhanush to Celebrate His 37th Birthday on July 28! Jagame Thandhiram Makers Announce the Release of the Film’s First Single with a New Poster 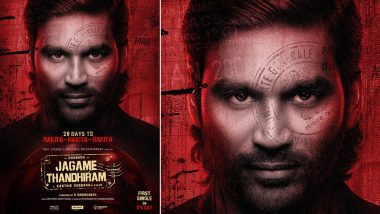 Dhanush, one of the most sought after actors of Tamil Cinema and also one of the most loved actors, would be turning a year older on July 28. Being his birthday month, all his fans were obviously waiting to know what would be that special surprise that is in store for them. Well, on Dhanush’s 37th birthday, fans would be in for a major treat. The makers of his upcoming flick, Jagame Thandhiram, have announced that they would be releasing the first single titled “Rakita Rakita Rakita” on the special day! Jagame Thandhiram: Kollywood Superstar Dhanush Goes All Guns Blazing In This New Poster! View Pic.

While sharing this amazing news, Jagame Thandhiram makers also shared a new, intriguing poster of Dhanush. The actor who will be seen playing the role a gangster in this movie, is seen calm and composed and one really cannot ignore the huge stamp mark on his left eye. This is indeed a great way to begin Dhanush’s birthday month and we bet, fans cannot remain calm right now. Dhanush Starrer Jagame Thandhiram Will Release In Theatres, Confirms Director Karthik Subbaraj!

Jagame Thandhiram also features Aishwarya Lekshmi, James Cosmo, Kalaiarasan and Joju George. Directed by Karthi Subbaraj, this film was scheduled to hit the theatres on May 1, but had to be postponed in the wake of coronavirus outbreak. Rumours were rife that the makers will opt for a direct OTT release, however, the film’s director rubbished all the speculations and clarified that Jagame Thandhiram will not skip theatrical release.

(The above story first appeared on LatestLY on Jul 01, 2020 02:47 PM IST. For more news and updates on politics, world, sports, entertainment and lifestyle, log on to our website latestly.com).