Vishal, Arya-starrer Enemy was released on the big screens as a Diwali special on November 4. Having said that, sadly the film is the latest victim of piracy, as it has been leaked online for free watch and download. 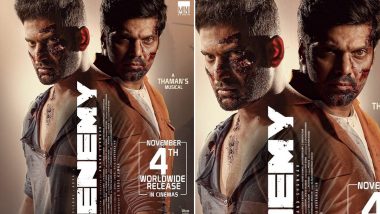 Vishal, Arya-starrer Enemy was released on the theatres on November 4. Helmed by Anand Shankar, the film revolves around two childhood friends and their escalating competitive nature. The synopsis of the actioner reads, "Enemy traces the story of two childhood friends, who turn foes due to one's ego and jealousy. Chozhan (Vishal) and Rajiv (Arya), in their early teens, are trained by Rajiv's father, an ex-CBI officer (Prakash Raj) to make them join the Police. But, certain situations make them part ways and years later, Chozhan becomes a departmental store owner and Rajiv becomes an underground hitman. Fate brings them together once again and they decide to lock horns against each other. What was the conflict between them and who won the face-off forms the plot." Having said that, as per the reviews, the Tamil-language action-thriller flick has garnered mixed reactions from critics. However, unfortunately, within a few hours after its release on the big screens, Enemy got leaked online. The movie is now available for streaming on torrent sites. There's an HD print available of the film to watch online. Enemy Teaser: Vishal And Arya's Face-Off Is Bloody, Cruel Yet Fascinating (Watch Video).

However, this is not the first time, a film has been leaked online for free watch. As almost every movie falls prey to this mess. In the past, many strict actions and restrictions were taken against these sites, but even after getting blocked, the sites bounce back promoting piracy. This needs severe action by the cyber cell.

For the unversed, Enemy sees Vishal as Chozhan and Arya as Rajiv. Apart from leads, the movie also stars Mirnalini Ravi, Mamta Mohandas, Prakash Raj, Thambi Ramaiah and Karunakaran, among others. Earlier, the film was scheduled to be theatrically released on October 14, 2021, but then pushed to November 4. The flick has released in both Tamil and Telugu languages.

(The above story first appeared on LatestLY on Nov 04, 2021 05:19 PM IST. For more news and updates on politics, world, sports, entertainment and lifestyle, log on to our website latestly.com).