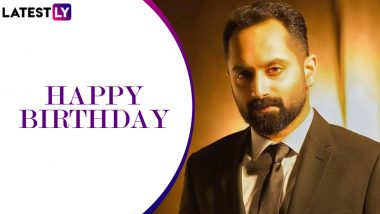 Director Fazil and Rozina’s son Fahadh Faasil is one of the brilliant actors of Bollywood. Be it any genre, Fahadh has always won hearts with his amazing acting skills. He has always got into the skin of a character and delivered it with sheer perfection. Romance, comedy, thriller, political drama or any other genre, Fahadh has left everyone enthralled with each film. The handsome hunk bagged his debut film in 2002 that was titled Kaiyethum Doorath, directed by his father. The film not only tanked at the box office, but Fahadh was even criticised for his performance. Trance Poster: Fahadh Faasil Gives a Rockstar Vibe in This New Still From Anwar Rasheed's Film.

Over a period of time, Fahadh Faasil not only improved his acting skills but even started to pick up the right projects and things started to change for this charming personality. Today he is one of the most bankable actors of Malayalam Cinema. He has worked in more than 40 films and has been a recipient of several prestigious awards. Today on the occasion of his 38th birthday, let’s take a look at some of the best films of Fahadh that deserve a Bollywood remake. Athiran Trailer: Fahadh Faasil and Sai Pallavi's Spooky Drama is Giving Us 'Get Out' and 'The Shining' Vibes.

It is a revenge thriller set in Bengaluru that revolves around the life of a 22-year-old nurse named Tessa (played by Rima Kallingal) from Kottayam. A nurse who gets raped and sets out to take revenge on her tormentors and one among them is Cyril (played by Fahadh Faasil). It was indeed impressive to watch Fahadh taking up such a challenging role.

Fahadh Faasil shared screen space with the megastar of Malayalam Cinema, Mammootty, who plays the titular role. It was a delight to watch two brilliant actors in this Lal Jose directed film. Immanuel is a middle-aged family man who is seeking for a better job to support his wife and son. This humble man lands an opportunity in a corporate sector that is an insurance company and his branch head is a young, smart but a short tempered person, Jeevan Raj. Despite Fahadh is shown as a ruthless character, you would still end up loving this brilliant talent of Mollywood.

A tale of three cousins – Aju (Dulquer Salmaan), Kunju (Nazriya Nazim) and Kuttan (Nivin Pauly) – although there is family drama yet it doesn’t stop them from being there for each other since childhood. When Kunju gets married to Das (Fahadh Faasil) and moves to Bangalore, things change pretty much. Fahadh is shown as a workaholic with some strict rules that one has to follow even at home, but what made this loving man change into an intense personality, will make your hearts melt for him.

We get to see a totally different avatar of Fahadh Faasil in this movie, directed by Sathyan Anthikad. It is like the story of any other young lad, who wished to have a modern name and not Prakashan (the character played by Fahadh) and try to fix it to Akash and then of course the big dreams of ending up with a job in Germany. Although he is qualified as a nurse, Prakashan considers it as a low-paid and thankless job and is seen becoming a sexist towards his career. But things change for him when he falls into a scam and later life takes him on a different route where he ends up valuing the profession of nursing.

Sai Pallavi and Fahadh Faasil are indeed a treat to watch on the big screen. Their magical chemistry in this psychological thriller is mind-blowing. Nithya (Sai) as an autistic royal heir and Dr Kannan Nair (Fahadh) as a psychiatrist took everyone by surprise. There are eerie scenes and light-hearted moments as well.

Fahadh Faasil’s avatar as Viju Prasad, a motivational trainer, is a thought-provoking film. A man, who is an atheist, gets hired by a corporate firm to work a pastor, gets transformed from man to godman. The journey of Viju to becoming Pastor Joshua Carlton is just maniacal.

Time and again Fahadh Faasil has proved his mettle as an actor. This National Award-winning actor has done many other brilliant films and one just cannot stop praising his performances. We wonder, if these movies are made in Bollywood, which actors would step into his shoes and manage to deliver a brilliant act like him. Here’s wishing Fahadh Faasil a very happy birthday!

(The above story first appeared on LatestLY on Aug 08, 2020 10:40 AM IST. For more news and updates on politics, world, sports, entertainment and lifestyle, log on to our website latestly.com).