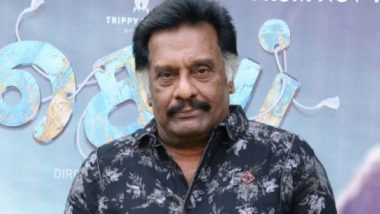 Indian actor Florent C Pereira, well-known for starring in Tamil cinema, passed away in Chennai on September 15. The actor had tested positive for COVID-19. The actor passed away aged 67 and his sudden demise has come as a shock to his friends and family. Florent had starred in several big films including the likes of Dharmapuri, Raja Mantri, Thodari, Chhatriyan, Tharamani, Kodiveeran and Velaiyilla Pattadhari 2. He was known to have taken on supporting roles in several Tamil films. Aditya Paudwal, Son Of Playback Singer Anuradha Paudwal, Dies Of Kidney Failure.

Not only was Pereira a popular actor, but he also worked in the media industry for a few years and was GM in Kalaignar TV. The actor was admitted at Rajiv Gandhi Government Hospital in Chennai whilst getting treatment for coronavirus but unfortunately breathed his last on Tuesday, September 15. Fans and colleagues of the actor mourned the loss of Pereira on social media. Hyderabad's Prasad IMAX Theatre Employee Dies By Suicide, As Cinema Halls Continue to Remain Closed To COVID-19.

I can't believe this

you are in the midst of us

Florent Pereira had made his debut in Tamil cinema with Vijay's Pudhiya Geethai. He acted in more than 50 Tamil films including Enkitta Mothate, Unemployed and more. Director Seenu Ramasamy shared the news about the demise of Florent Pereira on his Twitter as he wrote, "I can't believe this. Film Actor Kalaignar TV Ex GM good hearted soulful Mr.Florent Perera you are in the midst of us RIP Father My deepest condolence to his family & Friends. #CoronavirusPandemic @DrBrianPereira #Alexanderpereira”

(The above story first appeared on LatestLY on Sep 15, 2020 10:46 AM IST. For more news and updates on politics, world, sports, entertainment and lifestyle, log on to our website latestly.com).