Has Jyothika Signed a Film With Brother-in-Law Karthi in the Lead?

Karthi is said to be playing the lead role in director Jeethu Joseph's upcoming film. 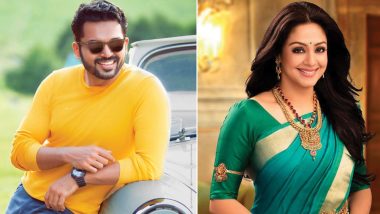 Jyothika has won hearts with her impeccable performances down south. She has been paired with her husband Suriya in seven films and now it is heard that she has signed a film with brother-in-law Karthi. As per latest reports, Jyothika and Karthi would apparently be collaborating for Jeethu Joseph’s upcoming thriller. Yes, the two are teaming up for the Malayalam director’s film. Kirik Party Actress Rashmika Mandanna Paired Opposite Karthi in Her First Tamil Film.

As per a report in In.com, Jyothika has a given a nod to do the film. She is keen to do the role which she has not done in the past. The report also mentions that Karthi and Jyothika will not be paired up in the film. According to Sify Movies, this yet-to-be-titled project will be produced by Viacom18. However, official announcement is awaited. Karthi Snaps at Kasthuri After She Mocks His Dad Sivakumar for the Selfie Controversy.

Meanwhile, Karthi is doing another film with director Lokesh Kanagaraj. The upcoming film produced by Dream Warrior Pictures is said to be titled, Kaidi. The first look poster of this gangster drama is expected to be out soon. Other than this, Karthi has also started shooting for Bakkiyaraj Kannan’s next. The actor’s film Dev failed to shine at the box office. The film also starred Rakul Preet Singh as the lead actress. Let’s wait and watch how his upcoming films performs at the ticket windows.

(The above story first appeared on LatestLY on Mar 07, 2019 11:17 AM IST. For more news and updates on politics, world, sports, entertainment and lifestyle, log on to our website latestly.com).