Indian 2: Kamal Haasan, Shankar Give 1 Crore Each to Families of Crew Members Who Tragically Died in the Crane Accident On Set

The film's director, actor and producer came forward to 1 cr each to the families of four who lost their lives in the crane accident. 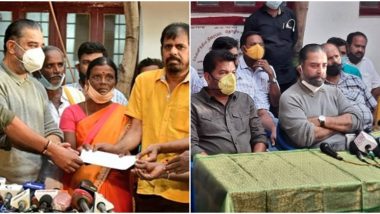 In an unfortunate incident, an accident claimed the lives of three technicians on the set of director Shankar's Indian 2 in February. The unfortunate incident left everyone saddened and the film's lead star Kamal Haasan as well as the film's production house condoled the incident and had promised financial aid for the families of those injured and died due to the accident. Now, the producers of the film, director Shankar and actor Kamal Haasan issued check to the families who were affected due to the accident. The film's director, actor and producer came forward to 1 cr each to the families of four who lost their lives in the crane accident. Indian 2 Shooting Accident: 3 Die After Crane Crashes At Movie Sets; Kamal Hassan Escapes Unhurt.

For the uninitiated, the deceased were identified as Krishna and Madhu, who were assistant directors in director Shankar’s team, and also Chandran from the catering team. The freak accident happened as a crane with heavy-duty light came crashing down. Haasan was captured along with director Shankar and Lyca Productions' heads as they recently handed over financial aid to the families of the deceased.

& @LycaProductions team giving 1 cr each to the families of four who died at the #Indian2 accident.. pic.twitter.com/lAsWLgAUkE

Taking to Twitter after the news of the accident was reported on February 26, director Shankar had tweeted saying, "It is with utmost grief, I’m tweeting. Since the tragic incident, I’ve been in a state of shock & having sleepless nights on the loss of my AD & crew. Having missed the crane by a whisker,I feel it would’ve been better if it was on me. Heartfelt condolences & prayers to the families."Indian 2 Crane Accident: Fans Of Kamal Haasan Are Heartbroken After 3 Technicians Die On The Set - Read Tweets.

Reacting to the accident in February, Haasan had spoken about the compensation being a means to help the families monetarily and could in no way recover the loss that they had incurred. He was quoted saying, "This is not a compensation for what we have lost, its just a first-aid for the families. The permanent solution is to prevent such accidents."

(The above story first appeared on LatestLY on Aug 06, 2020 07:29 PM IST. For more news and updates on politics, world, sports, entertainment and lifestyle, log on to our website latestly.com).