From playing a child artist to now being a superstar, Jr NTR’s filmy journey has been quite commendable and inspiring. And so, as the actor celebrates his birthday on May 20, let us take a look at the South star’s best movies as per IMDb. 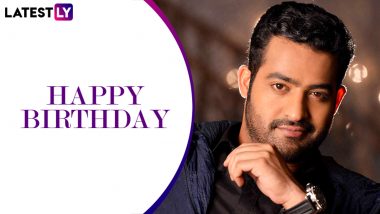 South star Jr NTR celebrates his 38th birthday today (May 20). Fondly called Tarak by his fans, he started his acting stint as a child artist in Brahmashri Vishwamitra (1991) which was then followed by Ramayanam (1996). Over the years, he has not just proven himself as a great actor, but we’ve also seen him nailing it in the dancing and singing department. The actor loves to take up challenging roles and has always come out victorious. If you happen to be his fan, you’ll agree that he is a rare gem.  Jr NTR Birthday Special: Dance Numbers of The South Super Star That Will Make You Want To Put On Your Dancing Shoes ASAP (Watch Videos).

From playing a child artist in films to now being a superstar, JR NTR’s filmy journey has been quite commendable and inspiring. And so, as the actor turns a year older today, let us take a look at the South star’s best movies as per IMDb. P.S: We have chosen his top-rated seven films. RRR: From Rumoured OTT Release to Pandemic Problems, 5 Revelations Jr NTR Made About SS Rajamouli's Magnum Opus to Deadline Hollywood.

Voted as one of the best films of Jr NTR on IMDb with 7.6 ratings, Nannaku Prematho was a hit among fans as well as critics. The movie narrates the story of how a son seeks revenge from a man who once ruined his father’s life. Indeed, a typical commercial flick with a great star cast.

Jr NTR and filmmaker Trivikram Srinivas collaborated for a riveting story and gave us this film. Set in the backdrop of a village with two warring groups and bloodshed around, the actor plays the role of Veera who takes up the charge to change the chaotic scenario.

This particular movie saw Tarak playing the role of a policeman who is harsh as well as ill-mouthed. Many critics gave the flick a thumbs down due to its content, but keeping, the controversies aside, this was the actor’s best performance till now.

This movie doubled Jr NTR’s fan following as reportedly it ran for more than 200 days in cinema halls. The premise of the flick is how the lead actor confronts the criminal who cheated and killed his parents. It sees Keerti Chawla as the female lead.

This was the very first time when Jr NTR played the triple role in his career. Even though it was not a cakewalk to play three characters at the same time, the star did it with much ease. He literally shined in all three roles. Bravo!

SS Rajamouli directorial, Simhadri was among the star's best work. This movie has everything - right music, amazing narration, super action scenes, and more which makes it a hit. It sees Ankitha and Bhumika Chawla in lead roles.

Last on the list, is a movie which serves entertainment as well as gives out a strong message. The film sees Jr NTR as an environmentalist. With powerful dialogues, brilliant star cast, fab emotional scenes, you can’t miss out on JG if you are a Tarak fan.

That’s it, guys! These are some of the top-rated movies of the birthday boy, Jr NTR as per IMDb. Meanwhile, he will be next seen in SS Rajamouli's RRR wherein he plays the role of Komaram Bheem. LatestLY wishes the 'Young Tiger' a happy birthday. Stay tuned!

(The above story first appeared on LatestLY on May 20, 2021 12:00 AM IST. For more news and updates on politics, world, sports, entertainment and lifestyle, log on to our website latestly.com).