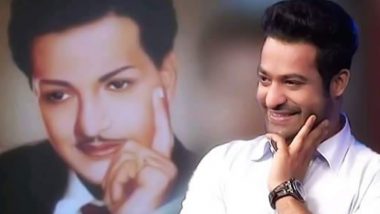 Jr NTR arrived early in the morning to avoid fans and paparazzi. Nonetheless, a sizable crowd gathered at the venue, so as to catch up with the 'RRR' actor. The security guards tried to keep them from approaching the hero. NTR 31 First Look: Jr NTR Looks Raw and Rough in His Upcoming Film With Prashanth Neel (View Pic).

Meanwhile, N.T. Rama Rao's centenary is being celebrated in grand style across Andhra Pradesh and Telangana. In terms of work, Jr NTR will soon begin 'NTR30' with Koratala Siva. He has also announced 'NTR31', a collaboration with Prashanth Neel.

(The above story first appeared on LatestLY on May 28, 2022 12:40 PM IST. For more news and updates on politics, world, sports, entertainment and lifestyle, log on to our website latestly.com).