Kajal Aggarwal Birthday: 5 Blockbusters Of This South Beauty That Are A Must Watch!

On June 19, Kajal Aggarwal celebrates her 35th birthday! On this special day, let’s take a look at those five films of this south beauty that are a must watch. 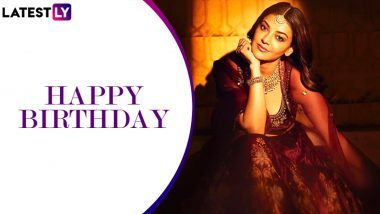 Kajal Aggarwal might be predominantly known for her works in the Tamil and Telugu film industries, but she has appeared in a few Hindi films. From her infectious smile to her power-packed onscreen roles to her stunning style statements, Kajal is indeed one of the most sought after actresses down south. She has not only had some amazing blockbusters in her kitty, but this South beauty is also known to work with some of the leading actors of Indian Cinema. Kajal Aggarwal and Pooja Hegde Roped In for Vijay Starrer Thalapathy 65?

Today (June 19), Kajal Aggarwal has turned a year older. She celebrates her 35th birthday and fans have been showering her with heaps of love and wishes across social media platforms. Kajal, one of the versatile actresses of Indian Cinema, has starred in some of the mass entertainers that turned out to be blockbusters. On this special day, let’s take a look at those five films of Kajal Aggarwal that are a must watch. Acharya: Kajal Aggarwal Has Not Walked Out Of Megastar Chiranjeevi Starrer, Confirms Actress’ Team.

Before Kajal Aggarwal made her debut as a lead actress, she first appeared in a supporting role in Vivek Oberoi and Aishwarya Rai Bachchan starrer Kyun! Ho Gaya Na..., in which she played the role of latter’s sister named Diya. Although it was a minor role, she won hearts with her cuteness.

The historical drama Magadheera was Kajal Aggarwal’s tenth film and it saw her playing double roles for the first time. Kajal’s portrayal of a princess in this SS Rajamouli’s magnum opus was praised by fans and critics. Magadheera became a major breakthrough for this stunning actress.

In AR Murugadoss’ Thuppakki, Kajal Aggarwal played the role of a boxer. Fans were not only impressed with her performance, but her chemistry with Thalapathy Vijay was also loved by movie buffs. Thuppakki had become the second Tamil film ever to collect more than Rs 100 crore at the box office.

In 2013, Kajal Aggarwal shared screen space with Jr NTR and Navdeep in the film Baadshah. It was the second time that she worked with Jr NTR and critics were impressed with her role of a social worker named Pilli Janaki.

After more than seven years, Kajal Aggarwal made her comeback to Bollywood with the action drama Singham that also featured Ajay Devgn in the lead role. She was seen as Kavya Bhosle, who was Inspector Bajirao Singham’s love interest. She did not have a meaty role, but audience loved how she played her part beautifully.

Kajal Aggarwal is indeed one of the most brilliant actresses of Indian Cinema. Her upcoming projects are Mosagallu, Acharya, Mumbai Saga, Hey Sinamika, Indian 2 and Paris Paris. We just cannot wait to see her back on the big screens! Happy Birthday, Kajal Aggarwal!

(The above story first appeared on LatestLY on Jun 19, 2020 12:01 AM IST. For more news and updates on politics, world, sports, entertainment and lifestyle, log on to our website latestly.com).