Sanjay Dutt, who recently recovered from cancer, has reportedly started shooting for the climax sequence of KGF Chapter 2. It features him as Adheera, the antagonist. 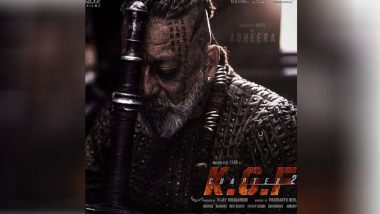 Sanjay Dutt, who recently recovered from cancer, has reportedly started shooting for the climax sequence of KGF Chapter 2. It features him as Adheera, the antagonist. According to a report in a leading tabloid, the superstar of Bollywood has started shooting for the high-octane action-packed sequences without any body double. KGF Chapter 2: Sanjay Dutt Gears Up To Play The Role Of Adheera!

The makers had reportedly suggested Sanjay Dutt to get a body double for the action sequences considering his health. However, the actor who is all fit and fine, was excited to perform the stunts on his own. He is being supervised by action director duo of Anbu-Arivu. A source revealed to Mirror, “The entire climax of the film is being shot on a large scale with plenty of action centered around a coal mine. Since Sanjay has just recovered from cancer, the producers had suggested that they get a body double for some of the scenes. But Sanjay insisted on doing all the stunts himself.” KGF 2 Star Sanjay Dutt Flaunts Platinum Blonde Hairdo and His New Suave Look Is a Treat for His Fans.

The source has also stated that on the occasion of KGF Chapter 2 lead actor Yash’s birthday, the makers would be unveiling the film’s teaser. If this report turns out to be true, it would indeed serve as one of the best treats for all those who are eagerly awaiting for KGF sequel. Stay tuned for further updates!

(The above story first appeared on LatestLY on Dec 11, 2020 08:41 AM IST. For more news and updates on politics, world, sports, entertainment and lifestyle, log on to our website latestly.com).