Khiladi Review: Ravi Teja’s Heist Thriller Is a Flop Show, As Per Critics

In Khiladi, Ravi Teja will be seen in a completely different avatar. Helmed by Ramesh Varma, the movie released on the big screens on February 11, 2022. Here, check out the review roundup of the film! 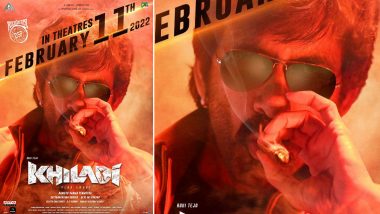 Ravi Teja's next Khiladi hit the big screens today (February 11). Helmed by Ramesh Varma, the posters, teaser, and trailer of the actioner had impressed fans. With this, a lot of hope is attached to the Telugu film. Talking about the premise, Khiladi revolves around a murder mystery and money laundering. Now, reviews of the said movie are out, and going by it, we feel that critics have disliked the flick. FYI, Ravi Teja plays a dual role in the movie alongside Arjun Sarja, Unni Mukundan, Meenakshi Chaudhary, and Dimple Hayathi. Here's the verdict of Khiladi below. Khiladi Trailer: Ravi Teja and Meenakshi Chaudhary’s Film Is Action-Packed With a Hint of Humour and Romance (Watch Video).

TOI: "Khiladi is an absurd, sometimes stylish and oddly wacky, disengaging crime thriller – do with that what you will."

The News Minute: "The dubbing is also poor. The characters mouth different lines and the voice-over is different. The film also has actors Arjun Sarja and Unni Mukundan, but they too remain underutilised."Khiladi Song Full Kick: Ravi Teja, Dimple Hayathi’s Peppy Track Will Make You Groove! (Watch Lyrical Video).

Great Andhra: "Khiladi has a tagline of ‘play smart’, but the film doesn’t boast any smartness. With an unconvincing climax and overstuffed second half, the con drama turns out to be a bore. Too many subplots and too many twists have burdened the experience."

The Indian Express: "In Khiladi, Ramesh Varma, who wrote the story and screenplay apart from directing it, seems to be inspired by typical Telugu television serials. The logic of Telugu serials is simple — stretch the drama, add enough melodrama and introduce a few dream sequences. As an afterthought, he gives us a few twists, which you can see coming a mile away."

So, after reading the above reviews, we feel that it's better to skip Khiladi for our own good. Tell us your views in the comment section below!

(The above story first appeared on LatestLY on Feb 11, 2022 06:50 PM IST. For more news and updates on politics, world, sports, entertainment and lifestyle, log on to our website latestly.com).