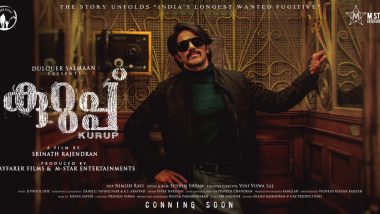 Dulquer Salmaan starrer Malayalam film, Kurup is much-awaited by fans. The Srinath Rajendran film is said to be based on Kerala's one of the most-wanted criminals, Sukumara Kurup. The teaser of the same was revealed on the actor's birthday this year. However, even before the trailer has hit the internet, the film is in the legal trouble. The movie reportedly has mentioned film representative Chacko's murder case in 1984, which made Kurup a household name. Chacko's family now demanded a screening of the film before hand. Kurup Sneak Peek: This Video Featuring Dulquer Salmaan As Sukumara Kurup, The Most Wanted Criminal, Is Classy And Massy!.

The makers of the movie received a legal notice from Chacko's wife Shanthamma and son. They have demanded from the makers to show them the entire film before its screening to ensure that Chacko's character (played by Tovino Thomas) isn't portrayed in a negative light. Shanthamma, who was pregnant when Chacko was killed, also wants to check whether Kurup's character (played by Dulquer) has been glorified.

Here’s a little surprise for Eid ! Another poster from our most ambitious “Kurup” ! In an ideal world today the film would have released in theatres all over. But guess we will have to make do with a poster release ! @dqswayfarerfilms #mstarcommunications #Kurup #Nextlook #IndiasMostWanted #LongestWantedFugitive

Meanwhile, the teaser of the film showed Dulquer in a very dashing avatar as Kurup. He was provided with a punchline and a retro background music, suiting a massy gangster drama. The makers of Kurup haven't yet reacted publicly to the legal notice.

(The above story first appeared on LatestLY on Aug 07, 2020 07:08 PM IST. For more news and updates on politics, world, sports, entertainment and lifestyle, log on to our website latestly.com).