Lady Superstar Nayanthara and Yogi Babu to Collaborate Again for a Comedy Flick? 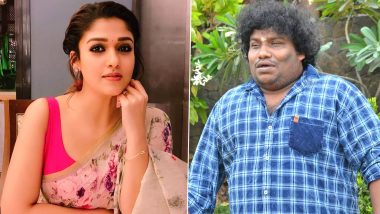 Nayanthara is known as the Lady Superstar down south. She has taken up some challenging roles in the past and even managed to deliver box office hits without having a male actor in the lead. Yogi Babu is best known for portraying comedy roles. Nayanthara and Yogi Babu have worked with each other in the past. Kolamavu Kokila, Darbar, Bigil, Airaa, Mr Local and Viswasam are some of the films in which these two actors had teamed up. It is now reported that Nayanthara and Yogi Babu would be teaming up again for a comedy flick. Confirmed! Ajmal Ameer Joins Nayanthara Starrer Netrikann.

Comali actor Jayam Ravi had once stated that Yogi Babu would soon be making his directorial debut and he’d also acting in it. As per a report in IndiaGlitz, Yogi Babu would be making his directorial debut and Nayanathara is being considered to play the lead actress in it. The report further states that the film will be produced under the banner of 18 Reels Productions by SP Chaudhary. This project is touted to be an out-and-out entertainer. However, there has been no official announcement made on it yet. Mookuthi Amman First Look Out! Nayanthara Looks Divine as a Goddess (See Pics).

Meanwhile, Nayanthara has a few intriguing projects lined up in her kitty that includes Netrikann, Mookuthi Amman, Annaatthe and Kaathuvaakula Rendu Kaadhal. Stay tuned for further updates from the world of entertainment.

(The above story first appeared on LatestLY on Apr 14, 2020 04:43 PM IST. For more news and updates on politics, world, sports, entertainment and lifestyle, log on to our website latestly.com).