Cine goers have high hopes from this brand new on-screen couple for both have immense fanbase. 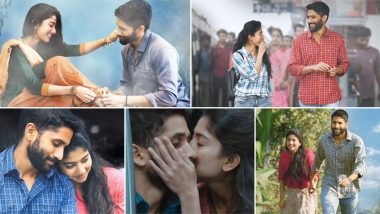 Sai Pallavi and Chaitanya Akkineni's romantic song "Ay Pilla" from the Telugu film, Love Story is out. The fans earlier got a glimpse of the song that left them wanting for more. Now, they have released the entire lyrical video of the track. Sai Pallavi and Naga Chaitanya's chemistry is crackling and going by the moments in the video, they are the new pair we can look forward to. Love Story: Naga Chaitanya and Sai Pallavi are all Mushy and Romantic in this First Look Poster (View Pic).

The song is composed and arranged by Pawan Ch. The lyrics are by Chaithanya Pingali. Haricharan's voice feels wonderful for this track along with singers Nakul Abhayankar and Hiral Viradia. The video has a few pictures from the actual video song and this only makes the wait for it seem longer! Check out the video below.

The teaser of Love Story was unveiled on the occasion of Naga Chaitanya's birthday. It was undoubtedly loved by the fans who are looking forward to the crackling chemistry between these two south hotties. The romantic drama is helmed by Sekhar Kammula. Earlier, we saw Naga Chaitanya in another romantic role in Majili. However,  it was more of an intense one and his first with wife Samantha Akkineni after marriage. Cine goers have high hopes from this brand new on-screen couple for both have immense fanbase. Especially after Sai Pallavi's extra-famous 'Malar' in Premam, her fanbase expects another such memorable romantic character played by her. How did you like the song?

(The above story first appeared on LatestLY on Mar 11, 2020 06:37 PM IST. For more news and updates on politics, world, sports, entertainment and lifestyle, log on to our website latestly.com).