Written and directed by Anand Chandra, Murder is the big-screen adaptation of the well documented Pranay murder, an honour killing case that took over Telangana in September 2018. 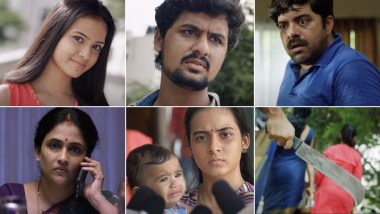 RGV released the trailer of the film today and the Telugu movie's trailer is in true RGV style- with dramatic music and no dialogues. It even features a scene of Pranay's gruesome murder with a machete. Murder: Ram Gopal Varma Issues Clarification On Twitter After His Web Film Lands In Legal Trouble (View Tweets).

Maruthi Rao along with his brother Sharavan were arrested after Pranay's murder on September 14, in what turned out to be a case of contract killing of Rs 1 crore. After he first secured bail, Maruthi's daughter Amrutha claimed that her father was trying to influence her stance in the murder case and got him arrested once again. Maruthi killed himself at a community guesthouse on March 8 in Hyderabad after securing bail once again. It was also reported that Amrutha was disallowed from attending her father's last rites as relatives also claimed that Maruthi had taken the extreme step because he was not able to bear the troubled relationship that his relation with Amrutha had become.

(The above story first appeared on LatestLY on Jul 28, 2020 01:58 PM IST. For more news and updates on politics, world, sports, entertainment and lifestyle, log on to our website latestly.com).