Pooja Hegde, born to Manjunath Hegde and Latha Hegde, has turned 30 on October 13, 2020. On the occasion of her birthday, let’s take a look at some of the hit songs in which she had appeared. 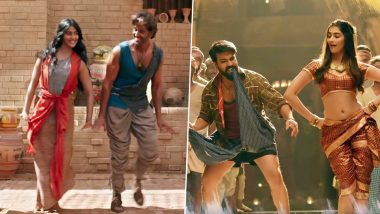 Pooja Hegde, born to Manjunath Hegde and Latha Hegde, has turned 30 on October 13, 2020. Before entering the world of cinema, she had participated in a few beauty pageant contestants such as Miss India 2009 and Miss Universe India 2010 where she was crowned as the second runner-up. It is two years after it she made her acting debut with the superhero film Mugamoodi that was helmed by Mysskin. She grabbed eyeballs with her beauty and impeccable performance. Pooja Hegde Birthday: Smart, Sassy and Uber-Stylish - Words that Perfectly Describe her Style File (View Pics).

Then in 2014 Pooja Hegde made her Bollywood debut opposite the handsome hunk, Hrithik Roshan, in the period drama Mohenjo Daro. She had bagged this role after the film’s director Ashutosh Gowariker’s wife had spotted her in an ad and called her to audition. Although this gorgeous actress must have appeared in a few films, she managed to win audiences hearts. On the occasion of her birthday, let’s take a look at some of the hit songs in which she had appeared. IndiGo Airline Crew Groove to Allu Arjun – Pooja Hegde’s Butta Bomma In Face Masks And Gloves, Video Goes Viral.

“Sarsariya” From Mohenjo Daro – It is a soft but a fun track composed by AR Rahman, in which Sarman (Hrithik Roshan) and Chaani (Pooja Hegde) can be seen grooving on the streets of the historic city.

“Jigelu Rani” From Rangasthalam – It is an highly energetic song featuring Ram Charan and Pooja Hegde. Composed by Devi Sri Prasad, Pooja’s stunning looks and moves made this massy number a huge hit.

“Paala Pitta” From Maharshi – Pooja Hegde is not just a wonderful actress, but also a great dancer too. This is peppy, colorful number in which Pooja is paired opposite Mahesh Babu.

“Chammo” From Housefull 4 – This movie featured an ensemble cast – Akshay Kumar, Kriti Kharbanda, Bobby Deol, Pooja Hedge, Riteish Deshmukh and Kriti Sanon – and the lead actors can be seen grooving together set against a stunning backdrop.

“Butta Bomma” From Ala Vaikunthapurramuloo – This movie starring Allu Arjun and Pooja Hegde not only received thumbs up from the audience, but the soundtrack of this film were also a huge hit. S Thaman composed “Butta Bomma” garnered lots of appreciation for its music and choreography.

Duvvada Jagannadham, Maharshi, Housefull 4, Ala Vaikunthapurramuloo are some of the amazing films that she has appeared in. Pooja Hegde has also a few amazing line-ups and one among this is Radhe Shyam in which she’d be sharing screen space with Prabhas. When the makers had released the film’s title poster, fans were left awestruck seeing her chemistry with the lead actor. Here’s wishing Pooja Hegde a very happy birthday and a great year ahead!

(The above story first appeared on LatestLY on Oct 13, 2020 10:03 AM IST. For more news and updates on politics, world, sports, entertainment and lifestyle, log on to our website latestly.com).