RRR Actress Alia Bhatt to Head to Hyderabad Next Week to Shoot for SS Rajamouli Directorial?

RRR will mark the debut of Alia Bhatt in Telugu Cinema. Alia is a brilliant actress and one just cannot wait to see her performance in this SS Rajamouli directorial. 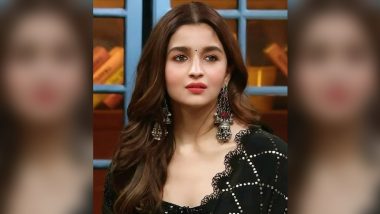 RRR will mark the debut of Alia Bhatt in Telugu Cinema. When ace filmmaker SS Rajamouli had announced that this Bollywood beauty would be paired opposite Ram Charan in the upcoming magnum opus, one couldn’t contain their excitement. Alia is a brilliant actress and one just cannot wait to see her performance in RRR. We have got to catch glimpses of lead actors Ram Charan and Jr NTR, and now we all are eagerly looking forward to see the first look of the film’s female leads, Alia Bhatt and Olivia Morris. RRR: Alia Bhatt Reacts to the Rumours of Priyanka Chopra Replacing Her in SS Rajamouli's Next.

The latest buzz is Alia Bhatt, who would be seen playing the character Sita in RRR, would be heading to Hyderabad next week to shoot the remaining scenes, reports Mid-Day. A trade source reportedly revealed to the tabloid that the pending scene to be done with Alia was supposed to be shot in March. However, that couldn’t happen as nationwide lockdown was imposed in the wake of coronavirus outbreak.

Talking about this pending portion to be shot with Alia Bhatt, the source was quoted as saying, “Alia had only one scene remaining when the pandemic forced the makers to call time on the project in March. Come the first week of November, she will shoot a major confrontation scene with NT Rama Rao Jr and Ram Charan. The sequence sees the character of Bheem — who had coined the slogan ‘Jal, Jangal, Zameen’, thus asserting that people who live in the forest should have a right to its natural resources — having an ideological clash with Sitarama Raju and Alia’s character. The scene was to be shot at a bungalow in Pune, but the plan has been changed post the pandemic.” RRR: These Vintage Stills Are Claimed To Be Ram Charan and Alia Bhatt's Looks From SS Rajamouli Movie (View Pics Inside).

RRR will also feature Ajay Devgn in a key role, and even he would be making his debut in Telugu Cinema with this SS Rajamouli directorial. Ray Stevenson and Alison Doody will also be seen playing pivotal roles. Also, Shriya Saran would be making a cameo appearance in this magnum opus. The makers are eyeing to release this mega budget film in early January next year.

(The above story first appeared on LatestLY on Oct 28, 2020 09:34 AM IST. For more news and updates on politics, world, sports, entertainment and lifestyle, log on to our website latestly.com).