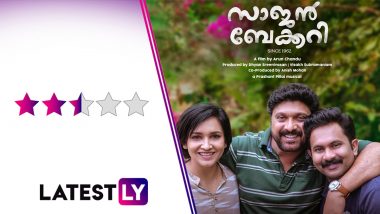 Saajan Bakery Since 1962 Movie Review: After having a theatrical release on February 12, Malayalam film Saajan Bakery Since 1962 has now begun streaming on Amazon Prime Video. Directed by Arun Chandu, the film is about two squabbling siblings who run their handed-down family Saajan Bakery in Ranni. Or rather, it is the elder sister Betsy (Lena) who is running the show, while her younger brother Bobin (Aju Varghese) is mostly feeding off on her her. Their maternal uncle whom they call Ammachan (KB Ganesh Kumar) also stays with them and helps in their bakery business. Drishyam 2 Movie Review: Mohanlal’s Sequel to His Blockbuster Family Thriller Is Loaded With Pulpy Surprises.

Like nearly every male Christian in Ranni, Bobin also has dreams of immigration, desiring to go to Australia. The only problem hampering his plans is that he doesn't want to leave his sister alone. More than actually caring about her welfare, it is the misogyny and selfishness of his that are concerned, as he wants to sell their bakery to fund the trip. He also falls for Merin (Ranjita Menon), a school friend, who has a 'scandalous' incident in the past that is still being used by people to mock her.

Betsy has separated from her Tamilian husband for some time, and has made running the bakery, and feeding the two men in her family, as her whole life. How these two siblings come to an understanding about what they really want from their lives and their bakery make for the rest of the story.

Saajan Bakery, with its delicious food themes and a feel-good premise, has the makings of a decent enough family entertainer on par with movies like Salt N Pepper. The actors do justice to their roles, with a fantastic Lena towering over everyone else. Aju Varghese uses his trademark set of expressions to make his flawed Bobin a character interesting enough to follow in what is his coming-of-age story. KB Ganesh Kumar shines well in the comic portions.

Where Saajan Bakery Since 1962 gets its hiccups from is in getting its oven heated in time. For a movie that is just about two hours long, the first hour, while trying to establish the character dynamics, meanders on and on. The romantic subplot between Bobin and Merin, while cute mostly because of Rajitha's sprightly performance, doesn't add much to the story. I still can't fathom why Merin would want to have a relationship with an irresponsible Bobin, something she herself initiates. Also her fourth-wall-breaking gimmicks feel out of place.

It is in the second half where Saajan Bakery gets some of its footing intact, by bringing the focus pointedly on the sibling relationship and strangely on food too (something the first half should have done as well). Three particular scenes stand out - one, where Bobin makes cream buns for the first time, leading to a very hilarious payoff. Second, when Betsy lets out her frustration on why she is pissed with her brother. And thirdly, the Ratatouille-inspired scene where a character takes a bite out of a cream bun, and is transported back to his childhood. The Great Indian Kitchen Movie Review: Nimisha Sajayan and Suraj Venjaramoodu’s Social Drama Is Brilliant!

Few more scenes like this, and then Saajan Bakery Since 1962 could have been much more than just an okayish feel-good film. The flashback portions involving the father (Aju Varghese, again) could have been avoided, as they don't add much to the film. His saga could have just done away with in the conversations between characters remembering him. Also they waste a fine actress like Grace Antony, who was too good in Halal Love Story, in such a small role. Halal Love Story Movie Review: Funny and Emotionally Stirring, Indrajith Sukumaran and Grace Antony’s Film Is a Winner!

The songs by Prashant Pillai are charming, while Guru Prasad's camerawork retains the greyish quaint appeal of Ranni.

(The above story first appeared on LatestLY on Mar 04, 2021 06:24 PM IST. For more news and updates on politics, world, sports, entertainment and lifestyle, log on to our website latestly.com).