Sai Pallavi Rejects a Fairness Cream Ad Deal Worth 2 Crores and All We Can Say is 'You Go Girl!'

Premam actress Sai Pallavi turned down a massive endorsement deal and we couldn't be prouder. 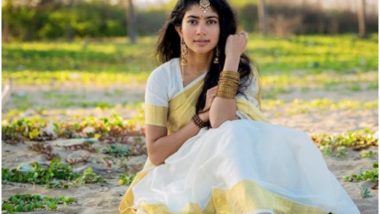 Actress Sai Pallavi is currently riding high on the success of her recent Malayalam film, Athiran along with Fahadh Faasil and Maari 2. We hear the 26-year-old actress was recently offered a huge endorsement deal that she rejected and is now hitting the headlines for it. Reports suggest that this endorsement deal was for a fairness cream and despite a huge sum of over 2 crores being offered, the actress turned it down. Sai Pallavi Looks Ethereal in the Kasavu Saree, Actress’ Traditional Avatar Ahead of Vishu 2019 Is Winning Hearts! See Pics

In the past, we have seen actresses receiving flak for promoting fairness creams. Bollywood actress Yami Gautam who is the face of a popular fairness cream brand was called out by Abhay Deol. According to recent reports, Sai Pallavi after rejecting the whopping 2 crore deal, mentioned that she bearly even uses cosmetics. Even in her films, Sai has maintained a natural look and we hail the actress' choice to stand up against the fairness cream endorsements. Will Sai Pallavi and Fahadh Faasil’s Chemistry in Athiran Win Audiences Hearts? See Pics

In an interview before, Sai had even mentioned about promoting beauty products and said, “I don’t endorse beauty products. You need to be confident about who you are and your skin colour.”

In 2017, actress Taapsee Pannu too had opted out of an event after she was asked to pose alongside a banner of fairness cream. She had told Hindustan Times saying, "I agree it was a last minute call, but when I found out that I would have to pose at the event with fairness brand in the background, I decided to take my name off the event. I have actually lost quite a few films because of being fair, so I will not propagate fairness in any way.”

Actor Abhay Deol, on the other hand, had gone on a social media rant criticising actors for endorsing fairness creams including Shah Rukh Khan, Vidya Balan and Deepika Padukone. Well, we hail Sai Pallavi's decision of not letting monetary gains come in the way of fulfilling a moral duty and hope that more actors can follow suit.

(The above story first appeared on LatestLY on Apr 20, 2019 09:51 AM IST. For more news and updates on politics, world, sports, entertainment and lifestyle, log on to our website latestly.com).