Sarvam Thaalamayam bowls you over with Menon's skilful presentation, very effective performances from GV Prakash and Nedumudi Venu and brilliant use of AR Rahman's music. 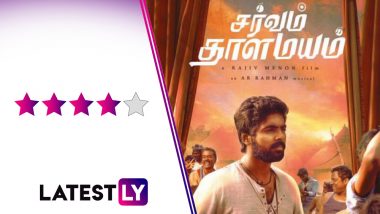 I can never understand how the director in noted cinematographer Rajiv Menon works. Even though he began his journey as a director in 1997 (with the narratively silly Minsara Kanavu), he has all but made three films till now. His last film before this week's release, Sarvam Thaalamayam, came out in 2000 (the flawed, but beautiful Kandukondain Kandukondain). Seriously, how did he resist the temptation to make films for 19 years? Or was he honing his skills all this time to become a better film-maker? If the second theory holds some value, then his efforts work out well; Sarvam Thaalamayam is his most superior movie to date! Sarvam Thaalamayam New Trailer: AR Rahman’s Music Is the Soul of This GV Prakash and Rajiv Menon Film – Watch Video.

Peter (GV Prakash Kumar) is an aimless youth living in Chennai who is an ardent fan of actor Thalapathy Vijay. His supportive father Johnson (Kumaravel) belongs to the clan of handicraftsmen who specialises in making percussion instruments. Johnson wants Peter, who has a natural inclination towards music, to join his line of work, which Peter agrees to, though somewhat unconvincingly. Once, his father asked Peter to deliver a mridangam to revered music maestro Palakkad Vembu Iyer (Nedumudi Venu) during a concert. Iyer makes Peter sit through the kacheri. That moment changes Peter's path forever, as he seeks his life's journey through the sound of rhythm, under the tutelage of Iyer himself.

Music holds an important aspect in Rajiv Menon's films. Unlike his previous movies where the score serves to enhance the narrative, here it is the soul of the film - a binding factor that connects all the main players in the film. It forms the lasting bond between an unruly but malleable Peter and the purist Iyer, who, in a real world, are two entities you never expect to connect. Peter is someone who seeks rhythm in even the chopping of vegetables, someone who regards every form of music and every venue to perform it with respect. In fact, it is a song that makes him fall for a Malayali nursing student, Sara (Aparna Balamurali), more than the fact that she stitched an injury on his head when they first met. This is especially so, since she sings a song belonging to a Vijay film, and our hero, a die-hard fan of Thalapathy (for him, Vijayadashami means his idol's birthday), ends up using the same problematic method as his idol to woo her - stalking. He uses the method to a better effect, however, to coax Iyer to accept him as a student.

Iyer, on the other hand, belongs to that clan of enthusiasts who sees music as an art that deserved to be preserved in its true form. For him, music is only to be enjoyed at a concert and not be exposed to frivolities like reality shows, which he looks down upon.

It is also music that drives a wedge between Iyer and his former disciple Mani (Vineeth), who is envious of Peter. Mani also represents the hierarchical values existing in the music industry, who -- although he may never explicitly state it -- believes that music is only for the privileged. In fact, he depends on the idea of striving in music so much, that his helplessness when it is taken away from him is difficult to watch.

This is an interesting casting coup, since Nedumudi Venu and Vineeth had played a father and son in the Malayalam classic Sargam. In that film, the father discovers that his vagabond son has the singing talents that surpass his own, and then trains him to be a better singer -- an aspect that GV Prakash Kumar takes over from Vineeth in here. That jealousy sure had a meta taste!

And like his distraught chela, Iyer is not devoid of frailties that make him human. His beliefs about music may have their merits, but they also show his stubbornness to adapt to the changing climate.  Iyer is also an ambivalent sexist, which is evident in his introductory scene. When a sly TV anchor (Divya Darshini) asks him why he doesn't perform with a female singer,  the question annoys him enough to stop the interview (this argument has a sweet conclusion in the final kacheri scene, if you observe carefully). In fact, it is also a female, in this case, his wife, that helps him broaden his mind in a very well-written scene towards the latter part. Interestingly, it is also a woman (Sara) who convinces Peter to look beyond mere mortals to learn the real essence of music.

So Sarvam Thaalamayam is as much a coming-of-age journey for a young, bright Peter as it is a path of self-evaluation for Iyer. Which is why it feels very captivating to watch these two find a common arena to bond over in music, as they inadvertently become catalysts in changing each other.

And it also helps that AR Rahman gets a movie that challenges the composer in him. As an ardent fan of the Oscar-winning musician, I had been very disappointed with some of the fare that he has produced in recent times. Sarvam Thaalamayam is a sort of return of form for him, as the composer delivers some fine tunes here. I always believed that AR Rahman's genius works best when he leans towards classical beats, which is exactly why, like Peter, we are also enthralled by Iyer's first kacheri. However, the best song in the film, "Varalama" is actually composed by the director himself, under the curation of Rahman. All You Need to Know About AR Rahman's Biography 'Notes of a Dream'.

Sarvam Thaalamayam's shortcomings are also the chinks in Menon's armour as a storyteller that we had seen in his other films, Minsara Kanavu and Kandukondain Kandukondain. His ability to present some of the subplots doesn't always click well. Like the scene in the second half where Peter and his father go to his village. Here he gets a first-hand experience of the artistry (as well as the prevalent poverty and casteism) involved in his father's profession (also leading to the enjoyable "Dingu Dongu") is insightful but the effect gets lost in the sudden transition back to city life. The reality show bits, while having an integral part in the proceedings, feel cliched and lazily written. Peter's country-wide cruising of self-discovery ("Sarvam Thaalamayam") also feels inserted for the sake of it, though it gives cinematographer Ravi Yadav an opportunity to beautifully capture some enchanting visuals.

However, these shortcomings are wonderfully tied up in the musically brilliant climax, that harps on one theme - in music, the real winner who wins over the listeners, including the critics.

As the exuberant, enthusiastic Peter, composer-turned-actor GV Prakash wins you over with his innocent boy-next-door looks and effective performance. He feels natural as the Vijay fan, and his composing skills lend credibility to the scenes where he plays mridangam. However, it is the second half that the performer in him impresses, as his character goes through highs and lows.

Nedumudi Venu is, undoubtedly, one of the finest actors in Indian cinema and in Sarvam Thaalamayam, he is a mesmerising treat to watch. He easily pulls off the musical genius in Iyer while keeping him grounded enough to let us see his shortcomings. Both these actors deserve a lot of accolades that this movie will bring for them.

Sara may feel like that mandatory love interest, but the talented Aparna Balamurali underplays it well enough, leaving an impact, especially in the scene where she convinces Peter to find his own guru. Kumaravel is sufficiently adorable as Peter's doting father. Vineeth's character isn't that well-etched but he is terrific in the first confrontation scene between Mani and Iyer. Dhivya Dharshini is natural as the manipulative host of the reality show and as Mani's sister.

- The Performances of Prakash and Nedumudi Venu

- Brilliant Use of Music

- A Couple of Characters aren't Well-Developed

Sarvam Thaalamayam bowls you over with Menon's skilful presentation, very effective performances from GV Prakash and Nedumudi Venu and brilliant use of AR Rahman's music. In this era where trite remixes and mass numbers rule, a movie like Sarvam Thaalamayam feels refreshing for bringing back the magic of enjoying music for what it is - a rhythm of nature! Go for this!

(The above story first appeared on LatestLY on Jan 29, 2019 06:18 PM IST. For more news and updates on politics, world, sports, entertainment and lifestyle, log on to our website latestly.com).