Sharan is a popular actor of Kannada Cinema. The 48-year-old actor is mostly known to do comedy and supporting roles. 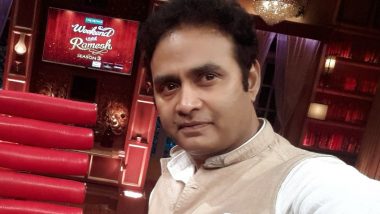 Sharan is a popular actor of Kannada Cinema. The 48-year-old actor is mostly known to do comedy and supporting roles. He made his acting debut in mid-1990s but shot to fame in the late 2000s. He bagged his first lead role in his hundredth film titled Rambo. After that he has been appearing as lead actor in comedy flick. Sharan, who recently resumed shooting for the upcoming flick Avatar Purusha, has been hospitalised after he complained of abdominal pain. Karnam Malleswari Biopic Director Sanjana Reddy Hospitalised, Producer Kona Venkat Says 'Nothing Critical'.

According to a report in TOI, Sharan has been admitted to a private hospital in Bengaluru. The actor reportedly complained of severe abdominal pain while he was on the sets of Avatar Purusha, shooting some stunt sequence. The actor’s sister Shruthi revealed to the leading daily that her brother is recuperating and there is nothing to worry. Tamil Actress Vijayalakshmi Hospitalised After She Attempts Suicide, Posts Video on Social Media.

Shruthi, the actor’s younger sister, was quoted as saying, “Sharan was doing a stunt sequence for Avatar Purusha when the pain increased. I think he might have had stomach pain for the last few days, but as the shoot has resumed after five months, he doesn’t want the shoot to be halted so he has persisted with the shoot. There is nothing serious, he will be back in action soon.” We wish Sharan a speedy recovery!

(The above story first appeared on LatestLY on Sep 27, 2020 10:53 AM IST. For more news and updates on politics, world, sports, entertainment and lifestyle, log on to our website latestly.com).