Sneha Birthday: From Thuruppugulan to Pudhupettai, Here’s Looking At Some Of The Best Films Of This South Beauty!

Suhasini Rajaram Naidu or better known as actress Sneha, is known for her works in south films. She has worked in films in Malayalam, Tamil and Telugu languages. 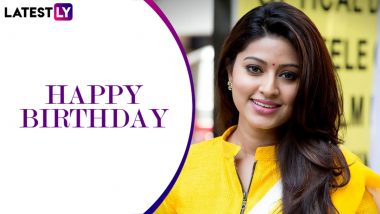 Suhasini Rajaram Naidu or better known as actress Sneha, is known for her works in south films. She has worked in films in Malayalam, Tamil and Telugu languages. Movies such as Thuruppugulan, Pudhupettai are some of the hits to her credit. Sneha, who made her acting debut in 2000, has worked with some of the popular stars of South Cinema. It includes Vijay, Mohanlal, Dhanush, Mammootty, among others. Also, Sneha had managed to become one of the contemporary lead actresses of Tamil Cinema in 2000. Pattas Review: Dhanush's Firecracker Performance Clubbed With Sneha's Strong Supporting Act Make This Film a Pongal Treat!

Today, Sneha has turned a year older. Wife of actor Prasanna, known for his works in Tamil Cinema, and a mother two adorable kids, this actress celebrates her 39th birthday today. On this special occasion, let’s take a look at some of the best films of this south beauty and the actors with whom she shared screen space.

Aanandham – Sneha first commercially successful film was this family drama written and directed by N Lingusamy. It had featured an ensemble cast including Mammootty, Devayani, Rambha among others in the lead. Sneha had played the character Viji, daughter of a rich arrogant man named Thavasi (Vijayakumar).

Thuruppugulan – Sneha once again shared screen space with Mammukka in the film helmed by Johny Antony. It was a comedy drama in which Innocent, Jagathi Sreekumar, Cochin Haneefa, Salim Kumar and Suraj Venjaramoodu were also seen in key roles.

Pudhupettai - Written and directed by Selvaraghavan, this Tamil gangster drama features Sneha in the lead along with Dhanush and Sonia Agarwal. Sneha played the role of commercial sex worker in this film.

Haridas – Starring Kishore and Sneha in the lead, this film had opened to great reviews but was moderately successful at the box office. She plays the character Amudhavalli, a teacher specialised to deal with special children.

Pattas – Sneha was last seen in RS Durai Senthilkumar’s film in which she once again shared screen space with Dhanush. She even underwent martial arts training for her role in this film.

These are some of the best films of actress Sneha. Here’s wishing this beauty a great birthday and a wonderful year ahead filled with some amazing projects!

(The above story first appeared on LatestLY on Oct 12, 2020 08:10 AM IST. For more news and updates on politics, world, sports, entertainment and lifestyle, log on to our website latestly.com).