Suriya, the superstar of Tamil cinema, has turned a year older today. Suriya who turned 44 today is known as the king of romance down south. The love ballads from his films have been a hit always. Let's take a look at those top five romantic songs from his films. 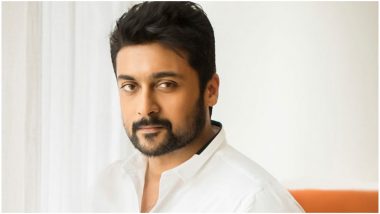 Suriya, the superstar of Tamil cinema, has turned a year older today. Born to Tamil actor Sivakumar and Lakshmi, this heartthrob has won millions of acts with his performance. Suriya who has turned 45 today, has two younger sibling - Karthi and Brindha. He could have easily gotten a career in acting industry, but Suriya did not directly stepped into the entertainment industry. Suriya’s Fans Trend #HappyBirthdaySuriya on Twitter as a Token of Love for the Kaappaan Actor.

He first worked at a garment exports factory for eight months. He initially did not have any interest in the acting field and hence he turned down the film Aasai. It was at the age of 22 he made his acting debut with Mani Ratnam produced Nerrukku Ner.

Even Suriya has had his own ups and downs. He did not have a great start in the film industry, there were films which turned out to be a flop commercially. It was Nandha, the 2001 film that gave Suriya the much-needed break. And then slowly, everything started falling in place for him.

He started giving back to back hits such as Kaakha Kaakha, Pithamagan, Aaytha Ezhuthu, and so on. Besides all of these, there is another popular thing about the films he does, the songs. Suriya is known as the king of romance down south. The love ballads from his films have been a hit always. On his birthday, let’s take a look at his best five romantic tracks. Kaappaan New Stills: These Pics Featuring Suriya, Mohanlal and Others Are a Must See!

The song "Nenjukkul Peidhidum" is one of the most popular love song, featuring Suriya and Sameera Reddy. Crooned by Hariharan, this love ballad is even today popular amongst young lovebirds. It is the rhythm of the guitar and the meaningful lyrics that spells the magic in this song.

"Munbe Vaa" is a magical, slow-paced romantic melody composed by the legendary AR Rahman. With Shreya Ghoshal and Naresh Iyer in the vocals, nothing more could make this song more likable. It is one of those Tamil tracks that anybody could easily fall in love with.

There must be no one who must have not heard the Hindi song "Dilko Tumse Pyar Hua" from Rehnaa Hai Terre Dil Mein. The song "Ondra Renda", sung by Bombay Jayashri, is based on the same Hindi song in which Harris Jayaraj himself was the music director. For those who don’t know, Kaakha Kaakha was the first blockbuster in Suriya’s career. This song features his ladylove, his gorgeous wife, Jyothika.

"Nenje Nenje", featuring Tamannaah opposite Suriya, was shot at numerous beautiful locations. It wasn’t just visually stunning but the music was also equally soothing. The variation in its tempo was another reason for this song to top the chartbusters back then.

"Mun Andhi" was another hit song from Suriya and Shruti Haasan starrer 7aum Arivu. The film’s soundtrack was composed by Harris Jayaraj and the lyrics were penned by Madhan Karky. "Mun Andhi" was one of the melodious tracks from the film which was shot in Thailand.

Besides such romantic songs, Suriya also has many other hit dance numbers to his credit. He is one such actor who would never fail to amaze us. To one of the most dashing actors down south, the one who makes everything look effortless on the big screens, we wish him a fabulous year ahead. Happy Birthday, Suriya!

(The above story first appeared on LatestLY on Jul 23, 2021 08:20 AM IST. For more news and updates on politics, world, sports, entertainment and lifestyle, log on to our website latestly.com).