Kaappaan New Stills: These Pics Featuring Suriya, Mohanlal and Others Are a Must See! 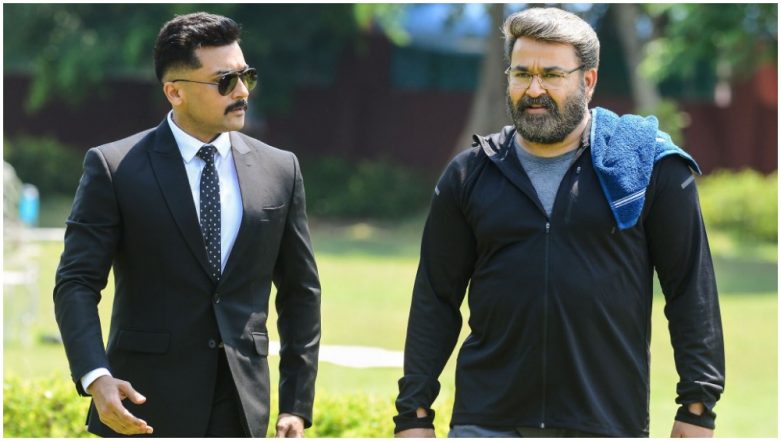 The upcoming Tamil film Kaappaan has an ensemble cast – Mohanlal, Suriya, Sayyeshaa and Arya. This is the first time that Mohanlal and Suriya have come together for a project and fans of the duo are eagerly waiting to watch them on the big screens. Few new stills of the lead actors from Kaappaan are doing rounds on social media and they are a must see. Kaappaan Teaser: Suriya and Mohanlal Starrer Looks Like an Exciting Action-Packed Political Drama.

On July 21 the audio launch of Kaappaan took place in Chennai and it was graced by Rajinikanth. About working with KV Anand, Mollywood superstar Mohanlal was quoted saying, “I know KV Anand for 25 years, since Thenmavin Kombath and with this film, he will prove he is the finest with the craft. When the script was narrated to me, I was thrilled to work with Suriya. He has an irresistible passion as an actor,” reports India Today. Bandobast: SS Rajamouli Unveils the Telugu Title of Mohanlal and Suriya’s ‘Kaappaan’.

At the audio launch Rajinikanth went gaga about Mohanlal. He was quoted saying, “Most natural actor in India, and a gift to Kaappaan.”  Mohanlal would be seen playing the role Indian Prime Minister and Suriya is essaying the role of a high-ranking security officer. The other actors who would be seen in pivotal roles include Boman Irani, Prem, Thalaivasal Vijay, Chirag Jani, Poorna and Samuthirakani. Produced under the banners of Lyca Productions, the film’s music is composed by Harris Jayaraj. Kaappaan is set to hit the screens on August 30.