It is being said that Suryaputra Mahavir Karna will be mounted on an exceptionally huge scale with attention to detail and visual effects at length. The multilingual project is written and directed by R S Vimal. 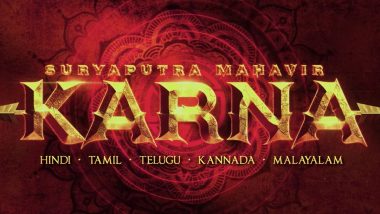 The epic saga of Mahabharata has become an inspiration for many filmmakers in the past but no one ever made the film from the perspective of Suryaputra Mahavir Karna. Karna was the spiritual son of the lord Surya and princess Kunti (mother of the Pandavas), and hence was a demigod of royal birth. He played a major part in the epic battle and now bringing this story alive for the first time ever on the big screen are producers Vashu Bhagnani, Deepshikha Deshmukh, and Jackky Bhagnani. Lucifer: When Prithviraj Sukumaran Threw in a Rajinikanth and Ajith Kumar Reference in Mohanlal’s Political Thriller.

It is being said that Suryaputra Mahavir Karna will be mounted on an exceptionally huge scale with attention to detail and visual effects at length. The multilingual project is written and directed by R S Vimal. This film will be the most distinguished and grand production from Pooja Entertainment to date as well. To give a glimpse of this grandness, the makers even unveiled the logo of the movie today.

The video shows a few glimpses of the battlefield with giant statues, carriages, elephants and men battling it out. We then see a person's leg which we think is our hero. He shoots a fire lit arrow onto the battleground which lands in the middle of the battlefield and we get to see the logo of the film. The background music is adding more drama but what's disappointing that we dont get to see who the actor is. It was reported that Prithviraj and Chiyaan Vikram were associated with the film at different points in time but the makers are yet to reveal who is actually going to star in the film.

The makers of Suryaputra Mahavir Karna have also roped in India's celebrated poet Dr. Kumar Vishwas to pen the dialogues, lyrics and additional screenplay of the film. the film will mark his first-ever association with any film in India. Vishwas routinely gives performances in which he recites his poetry and demonstrates his love for Hindi, Urdu, and Sanskrit literature. Chiyaan Vikram, South Superstar, Turns 54 Today! Fans Trend #HBDChiyaanVikram on Twitter.

The film will be made in Hindi, Tamil, Telugu, Kannada, and Malayalam and is all set to redefine the genre of opulent period dramas in the Indian film industry. It promises to be the most eagerly awaited blockbuster of the decade. The makers are yet to announce the release date of the film as well.

(The above story first appeared on LatestLY on Feb 23, 2021 03:21 PM IST. For more news and updates on politics, world, sports, entertainment and lifestyle, log on to our website latestly.com).