Thala Ajith To Team Up With Soorarai Pottru Director Sudha Kongara For An Action Film? GV Prakash Drops A Hint 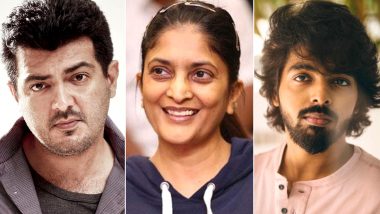 While fans are eagerly waiting for an update from Thala Ajith’s upcoming project Valimai, here’s another intriguing dose of information, courtesy GV Prakash. The popular music composer had recently question and answer session, #AskGV, on Twitter. One of the fans asked him if Soorarai Pottru director Sudha Kongara and Thala Ajith would be teaming up for a film. GV Prakash has responded to the fan through a video message. Thala Ajith Starrer Valimai to Be Dubbed in Hindi?

The fan had asked, “Ajith sir and Sudha Kongara movie nadakuma..??” To this GV Prakash dropped a hint by saying, “It’s actually a great script, it will be great if it happens. Sudha will go to next level after Soorarai Pottru, similarly she has come up with a great script. It will be a huge action film, Sudha had narrated that script to me, I think it’s fantastic. If it happens it will be amazing.” Rumours are doing rounds since quite sometime that the film that Sudha will be helming with Ajith would be bankrolled by AGS Entertainment. However, there has been no official update on it yet. Soorarai Pottru to Release on Amazon Prime Video on October 30!

Talking about Sudha Kongara’s upcoming movie Soorarai Pottru starring Suriya in the lead, the film is all set to hit the OTT platform on October 30. The film is getting a direct digital release and one can watch it on Amazon Prime Video.

(The above story first appeared on LatestLY on Sep 22, 2020 11:18 AM IST. For more news and updates on politics, world, sports, entertainment and lifestyle, log on to our website latestly.com).