Trisha Krishnan won hearts of many when she walked for the beauty pageant Miss Madras and that too 21 years ago. She has shared a beautiful picture in which she is seen crowned as Miss Madras 1999. 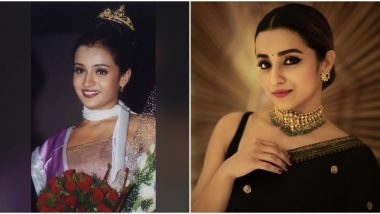 Trisha Krishnan is indeed one of the most successful and leading actresses of Tamil Cinema. She has also acted in a few Telugu and Malayalam films as well. She has been winning hearts through her incredible performances on the big screen. But this south beauty won hearts of many when she had walked for the beauty pageant Miss Madras and that too 21 years ago. She has shared a beautiful picture in which she is seen crowned as Miss Madras 1999. Trisha Krishnan Reveals ‘Sex and the City’ Is Her All-Time Favourite Web Series!

It was at the age of 16 when Trisha Krishnan had won the prestigious title of Miss Madras. It was after participating in various beauty pageants, she had come into notice of filmmakers and producers. Before entering the world of cinema, Trisha was into modelling and also featured in numerous print and television commercials. For the unversed, Trisha had also participated in the Miss India 2001 contest. Although she could not win the title, she won the ‘Beautiful Smile’ award. While sharing the throwback moment, Trisha captioned the picture as, “30/09/1999 The day my life changed... #MissChennai1999.” Mohanlal and Trisha Krishnan Starrer Ram Is Suspended Due to the Pandemic and Not Shelved, Clarifies Director Jeethu Joseph.

On the work front, Trisha Krishna has some amazing projects lined up and that comprises of Paramapadham Vilayattu, Garjanai, Raangi, Ram and Ponniyin Selvan. Stay tuned for further updates!

(The above story first appeared on LatestLY on Sep 30, 2020 01:22 PM IST. For more news and updates on politics, world, sports, entertainment and lifestyle, log on to our website latestly.com).