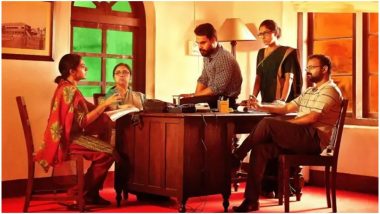 Now before you call it plagiarism, Virus is not a remake of Contagion, although the treatment may be inspired. Unlike the Hollywood film, which was a fictional narrative, Virus is based on real-life incidents around the NIPAH virus that had spread in Kerala a couple of years back (and is now threatening to raise its head again in the state). The movie has a huge roster of interesting actors like Revathi, Kunchacko Boban, Parvathy, Tovino Thomas, Asif Ali, Rahman, Indrajith Sukumaran, Soubin Shahir, Sreenath Bhasi, Dileesh Pothan, Rima Kallingal, Madonna Sebastian, Ramya Nambeeshan, Sharafudheen and Basil Joseph. Nipah Virus: What Is It? Symptoms, Causes, Treatment and Preventive Measures.

Here's the trailer of Virus:

Virus released in India on June 7, where it was met with good response from the critics. Here's what major publications are saying about the movie:

News18 says, "For its 152-minute duration, Virus will take you through many emotional roller-coasters. This one is contagious enough to make you skip a heartbeat or evoking tears. It’s more than just a film, it’s humans joining hands to beat a deadly disease."

The News Minute says, "The central nervous system of Virus is the medical mystery but it's the small sub-plot which branch off from it that make the film human. Not all of these may be equally compelling but when the sterile quarantine suits seem too much to take, the screenplay shifts and gives us stories that turn the "patient" into a person again and make us sit through the thriller till the end."

Times of India says, "The film’s narrative has a striking resemblance to the Hollywood medical thriller, 'Contagion'. Rajeev Ravi’s cinematography sets the right tone for the docu-fiction. Sushin Shyam’s music is good, but if it gels with the film is another concern. As the film’s central character is Nipah, it is tough to point out any individual performance as remarkable."

Lensmen Reviews says, "The collective effort on and off the screen has really enabled Virus to be a superbly made thriller. Every department has done a commendable job in their efforts to present an authentic story. And the most brilliant one of them all was the script that made sure that every character has a little bit of back-story which will make them a real human being on screen."

(The above story first appeared on LatestLY on Jun 07, 2019 10:01 PM IST. For more news and updates on politics, world, sports, entertainment and lifestyle, log on to our website latestly.com).