Yashoda: Samantha Ruth Prabhu’s Next Film Likely to Get Postponed

The release of Samantha Ruth Prabhu's upcoming movie, the Hari and Harish-directed woman-centric sci-fi thriller Yashoda, has most likely been delayed. 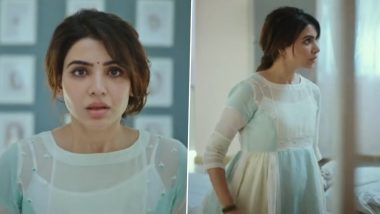 The release of Samantha Ruth Prabhu's upcoming movie, the Hari and Harish-directed woman-centric sci-fi thriller Yashoda, has most likely been delayed. Yashoda was slated to premiere on August 12, but the makers are now said to be looking for a new release date. They have, however, not made a formal announcement to this effect, nor an explanation for the postponement. Yashoda: Varalaxmi Sarathkumar Shares a Video With Beautiful Moments As She Wraps Up Her Part in Samantha Ruth Prabhu’s Film – WATCH.

The upcoming drama Yashoda is a survival thriller about an imprisoned woman, played by Samantha Ruth Prabhu. It was originally shot in Telugu, but is now scheduled to be released in Tamil, Malayalam, Kannada and Hindi after being dubbed. Samantha Ruth Prabhu Beats Deepika Padukone, Alia Bhatt and Others to Stay on the Top of Ormax’s Most Popular Female Stars List.

(The above story first appeared on LatestLY on Jun 29, 2022 11:25 AM IST. For more news and updates on politics, world, sports, entertainment and lifestyle, log on to our website latestly.com).