The Girl on the Train Teaser: Parineeti Chopra’s Curious Self Leads Her to a Dark Past (Watch Video)

Parineeti had already given us a sneak peek into her character with the posters and still that she has shared earlier and the teaser is a much deeper look into it. 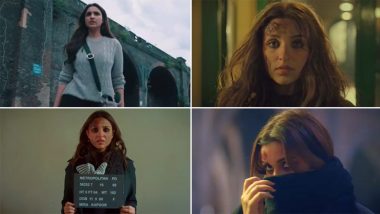 The Girl on the Train Teaser (Photo Credits: Instagram)

Parineeti Chopra's The Girl On The Train which is an official remake of Emily Blunt starrer film is one of the most anticipated movies currently. The film that was supposed to release on May 8, last year, couldn't make it the theatres due to the pandemic. The makers are now taking the OTT route and are going to release the film on Netflix. With just a month approximately left for its premiere online, Parineeti and team have finally dropped the teaser of the film. Parineeti Chopra's 'The Girl On The Train' Remake To Release On May 8, 2020, New Picture Looks Gritty AF.

Parineeti had already given us a sneak peek into her character with the posters and still that she has shared earlier and the teaser is a much deeper look into it. The teaser shows a few glimpses of Parineeti following someone, getting frustrated and getting hurt while on her mission in this murder mystery. While the film also features Avinash Tiwari, Aditi Rao Hydari and Kirti Kulhari, the makers decided to keep their characters a suspense even now.

"A character that will live inside me permanently. I miss her. I miss playing her. I feel like I've grown up. I feel grateful. Life-changing is an understatement. I'm smiling as I write this and with that, I head back home - looking forward, with my heart full," Parineeti wrote on her Instagram page after she wrapped up the movie. Parineeti Chopra Pens Emotional Note after Wrapping The Girl On The Train; Anushka Sharma Comments 'I Feel You'.

The film is based on the 2015 bestseller by Paula Hawkins by the same name. It narrates the story of a divorcee woman who gets entangled in a missing person's investigation that throws her life to the brink. The film is directed by Ribhu Dasgupta and will be premiering on February 26, 2021.

(The above story first appeared on LatestLY on Jan 13, 2021 11:47 AM IST. For more news and updates on politics, world, sports, entertainment and lifestyle, log on to our website latestly.com).