Amala Paul: If You Have Right Mindset, You Can Make It Big on OTT

Actress Amala Paul, who plays the cop Durga in the upcoming Telugu web series Kudi Yedamaithe, feels that the best part of the rise of OTT culture is that now there is something for everyone. 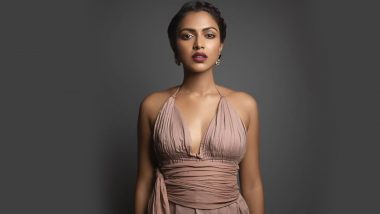 Actress Amala Paul, who plays the cop Durga in the upcoming Telugu web series Kudi Yedamaithe, feels that the best part of the rise of OTT culture is that now there is something for everyone. The actress, who has made a mark in Tamil and Malayalam films, seemed excited about the boom of digital platforms. "The best part of OTT is the creative aspects to it, like there are so many beautiful, crazy and wide variety of stories. The scripts I am seeing from 2020 are so different, there is so much uniqueness and growth and everyone is ready to experiment," Amala tells IANS. Amala Paul: Working on Separating Private Life From Work Life.

She adds: "The best part is that if you have the right mindset, you can make it bit. It has scope for everyone. I miss going to theatre and I miss having my big popcorn bucket and cold drink -- nothing can replace that -- but right now I think it is best to go with the flow." While most of her films have released in theatres, working on a digital platform doesn't make thing any different or difficult for the actress. Akshay Kumar To Star In The Hindi Remake Of Vishnu Vishal-Amala Paul’s Ratsasan – Reports.

"Evolution and progressing has been my thing. Change is something important for me and I can adapt beautifully to change. That is how the world evolves. When TV came, radio took a back space. I feel very blessed to be part of the generation where I have seen a VCR, CD, DVD, home theatre, theatre and now its OTT," says the actress, whose series will steam on Aha Video.

(The above story first appeared on LatestLY on Jul 16, 2021 10:31 PM IST. For more news and updates on politics, world, sports, entertainment and lifestyle, log on to our website latestly.com).